HomeKratomWhere Does Kratom Come From? 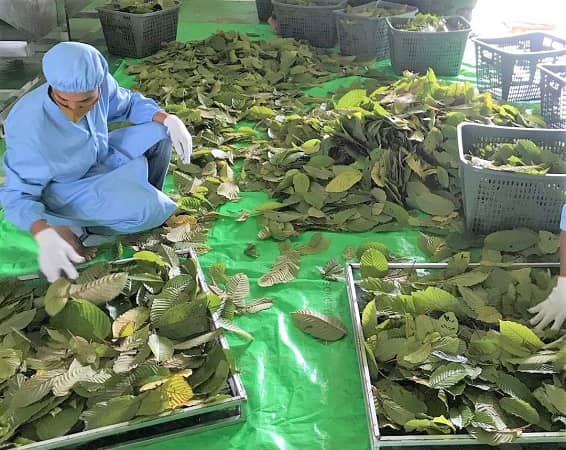 For those who may not know, kratom is a beneficial, medicinal tropical evergreen tree from Southeast Asia. It is related to the coffee plant. The kratom tree can grow very large and has glossy leaves that are deep green in color.

The tree is called Mitragyna speciosa and it grows best in tropical, hot, humid climates. When the conditions are right, the kratom tree can grow up to 25 meters in height and develop a thick bark. The leaves of the tree is the part that contains naturally occurring alkaloids.

For hundreds, possibly even thousands of years kratom has been used medicinally, socially, and spiritually in numerous cultures around Southeast Asia. Traditionally, people would chew the leaves or steep the leaves into hot tea. However, these days the most common way to consume kratom is through powdered, dried kratom leaves.

Historically, the kratom leaves have been used for fatigue, and local cultures also tout the plant’s painkilling and anxiolytic effects. Tribespeople also uses it for religious and communal events and have been doing so for centuries.

The first record of the kratom tree being mentioned in Western records came from 1839, when a Dutch botanist named Pieter Korthals documented the discovery. He was employed by the Dutch East India Service and called the plant Stephegyne speciosa.

In 1859, a British scientist named George Haviland recategorized the kratom tree and gave it the scientific name that is still in use today, Mitragyna speciosa. However, it still was vastly unknown to most people in the Western hemisphere until the 1960s and 1970s when U.S. soldiers brought kratom home from Vietnam.

The kratom plant gradually gained traction and gained significant popularity even though it was not commercially available until the final years of the 20th century. During the late 90s and early 2000s, kratom brands began to appear and kratom became available to U.S. consumers. Now, the kratom market has exploded and kratom is available locally and online in various forms with many different strains designed for different beneficial effects.

Kratom is an indigenous plant in several different Southeast Asia countries, including Thailand, Malaysia, Indonesia, Vietnam, Myanmar, and Papua New Guinea. However, these days some people grow it in other areas, including the far Southern United States, where it is hot and humid enough.

Malaysia has a ban on local kratom consumption and it cannot be exported unless the kratom is grown and shipped without any processing involved. Therefore, most kratom does not come from Malaysia due to their strict laws. Kratom strains that mention “Malay” or “Malaysian,” such as the increasingly popular Green Malay strain, are named for the attributes and alkaloid makeup of kratom in Malaysia, even though the kratom is unlikely to have been grown there.

Vietnam has a ban on kratom. However, some people familiar with Vietnam crops and their local laws believe that it may be possible that some farmers either export the plant in secret or even work with lax local governments to export the kratom. However, it is unlikely that a large amount of kratom outside Southeast Asia is actually from Vietnam. Either way, White Vietnam is an excellent white strain for energy without being overly potent and stimulating.

Thailand also has laws against the export of kratom unless it is for medicinal use. Trees still grow there, and some local groups still legally consume kratom. However, kratom is a scheduled narcotic in Thailand and anyone in possession of kratom can be fined or even jailed if they do not have their medicine card. The government in Thailand takes kratom seriously, but some people may still use it illegally.

Must Read:  How to Avoid Terrible Kratom Hangover?

In 2018, Thailand slightly relaxed its restrictions on the plant. The law since 2018 only allows kratom for medicinal purposes. There are still restrictions and limitations for its use, but if it is for medicine, there are ways to grow and export the plant. It is still unlikely that kratom’s production is large enough in Thailand to claim a significant portion of the export market. People like Red Thai kratom because it does not make them as sleepy as other red strains but is still a good choice for pain.

Borneo has conditions that are virtually perfect for kratom growth. Kratom naturally occurs throughout the island. The Indonesian people have used kratom ceremonially for decades or longer. They believe that kratom can be beneficial to many people around the world. Farmers and workers in Indonesia commonly use kratom to help with productivity. Some also use kratom to relax after a long day of work.

Indonesia does have a ban on local kratom consumption. Though kratom plantations still drive many local economies. As the demand for kratom grew in the United States and worldwide, these Indonesian areas experienced economic growth.

There is pending legislation in Indonesia to ban kratom farms. The legislation’s original dates were pushed forward, and now they are looking at a full ban in 2022. Many local farmers do not have a secondary crop to move to if this ban does occur. They used to grow rubber, but synthetic rubber alternatives have constricted their market. This made many Indonesian farmers turn to kratom, but now their kratom productivity is also in jeopardy.

If the law goes through in Indonesia, the kratom market would be greatly impacted and prices would likely increase substantially. The American Kratom Association and other groups attempt to connect with the Indonesian government to prevent more restrictions or bans.

Kratom can be grown locally in people’s backyards or along the banks of a creek or river. However, the exported kratom comes from large kratom plantations. The manufacturing and processing of the plant are important to the production of quality kratom products.

The kratom tree grows and regularly sheds leaves. When the leaves reach a mature age, the farmers will harvest them. They have to remove the leaves while preserving the tree so that more leaves will quickly grow. The leaves are separated by the color of their veins, quality, age, and size.

The kratom leaves are dried out by the sun for an extended period of time. The dried kratom leaves are easier to store and prepare for export. They are also less likely to develop contaminates, mold, and will remain fresh for longer. After a few days, the leaves will be brittle and will be crushed or powdered.

There are tons of kratom strains, and most of them refer to a location such as Thai, Indo, Bali, or Malay. However, most kratom comes from Indonesia and therefore, the name does not necessarily indicate the origin of the leaf. The term does refer to specific qualities or amounts of alkaloids that produce different effects. Kratom has been used medicinally and culturally in Southeast Asia for decades or even centuries. For now, it is available mainly to most of the world so that anyone can reap the amazing benefits of the leaves.

Previous article
How To Quit Smoking Weed?
Next article
Is Marijuana Legal In Los Angeles? Can I Buy, Ship, & Travel With It?