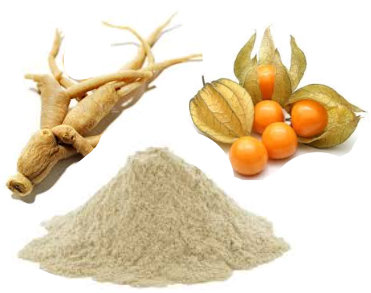 (also known as Indian ginseng) is the natural herb that has been used for improving mental and physical health for centuries.

The modern medical research has found that this amazing herb has excellent healing properties which can be used to treat anxiety, improve concentration, and increase energy.

Ashwagandha is an adaptogenic herb that has remarkable medicinal qualities for a human body.

Adaptogens are the substances that help in modulating the response of our body to anxiety and stress. These substances help the body to deal with internal and external stressors.

It is a plant that is native to India, Middle East and various African countries but is now also grown in the USA.

This plant belongs to the family of tomatoes. It bears red fruit which is nearly a size of the peanut. In traditional medicine, for centuries, it has been used to boost the immune system.

Various clinical studies conducted on animals as well as on humans have found that this wonderful herb helps in making your body adaptable to stress and anxiety.

In which form Ashwagandha is available?

Ashwagandha is available in the form of powder, tablets, capsules and as a liquid extract. Traditionally, it is used as a dried powder which is combined with warm milk and honey to make a soothing drink.

This mixture works well when taken before bedtime. It helps to calm mind and body, promoting healthy patterns of sleep and strength.

If you feel uncomfortable with its powder form, then you can use it in tablet or capsule form which is a convenient method of ashwagandha intake.

You can also find it in the form of liquid extract which is easy to absorb, comfortable to take and has a longer shelf life.

How Ashwagandha works in reducing stress and anxiety?

Stress is the indispensable part of our routine life. Our body produces a hormone called ‘cortisol’ to deal with it. But if the factors that cause stress for a long period then the level of cortisol in your body rises above the normal level.

This leads to ‘chronic stress.’ The high levels of cortisol in the body pull down the others hormone level as well as the level of mood-enhancing neurotransmitters such as serotonin and dopamine. If this condition is not treated on time, it leads to anxiety and depression.

Ashwagandha helps to cope with v carious stress conditions. In a study conducted on people suffering from chronic stress, it was found that the use of the herb ashwagandha roots brought down levels of cortisol by nearly 28% in only two months and few cases, it even averted stress.

The results of another clinical research study showed that a high concentration Ashwagandha root extract efficiently improved the resistance of individual towards stress resulting in improvement of the quality of life.

Another research study gives credit to two of the chemicals in ashwagandha which provides it with anti-stress properties; sitoindosides and acylsterylglucosides.

As an adaptogen, ashwagandha uses withanolide glycosides for hindering the responses of stress in the brain while blocking the release of stress-related hormones like NADPH diphosphorus and cortisol.

This herb also uses serotonergic and GABAergic signaling which imitates the effects of natural GABA receptors in the brain.

Ashwagandha for anxiety and depression

Anxiety and depression accompany each other. Depression is not only a long-term stress, but it is a disorder which badly affects your mental as well as physical health especially your heart. Nearly 1 million people of all age groups across the world commit suicide induced by depression.

Depression is often accompanied by the anxiety disorder that has possible symptoms including mouth dryness, excessive sweating, raised heartbeat, panic attacks and feelings of butterflies in the stomach. It is also one of the primary causes of suicidal deaths.

Ashwagandha is found to be highly effective in treating the symptoms of anxiety and stress.

In a research study conducted on human subjects suffering from chronic depression, 300 mg of ashwagandha capsules or a placebo were given twice a day for two months.

After this period the subjects were asked to fill the questionnaire which they also filled before the start of the study. The difference between before and after scores were outstanding.

The people who were given ashwagandha capsules felt much calmed and were better able to control their anxiety and depression.

They experienced less anxiety and depression symptoms and were also able to get better sleep. The increase in their productivity was also observed.

In two studies conducted on rats, the root extract of ashwagandha acted as the stabilizer of mood and placed an anxiolytic effect on those rates which suffered from anxiety and depression.

Must Read:  Does Passion Flower Get You High Like Marijuana?

Due to anxiety and depression, the body’s mechanism to cope with stressful situations is adversely affected.

A good sleep at night is considered a stress reliever but the patients suffering from anxiety and depression are unable to take proper sleep and often suffer insomnia.

It is not a sedative, but it helps in reducing stress and anxiety while improving body’s mechanism to cope with a stressful situation.

This leads to a rejuvenation of nervous system; producing positive energy which helps relieves stress and ultimately improves sleep.

Ashwagandha has been found to work better than psychotherapy. This has been proved through a research study, in which the patients were suffering from mild to severe anxiety were given different naturopathic treatments that included multi-vitamins, dietary counseling, cognitive-behavioral therapy and ashwagandha. This gave better results than the standard form of psychotherapy.

Does use of Ashwagandha causes dependency?

There are no severe side effects experienced by users of ashwagandha. It is useful and safe for most of the users however the main issue that people may face is the management of ashwagandha’s sedation like effects.

So, there is a need to know that the use of ashwagandha takes you into a drowsy and hyper-relaxed mental state.

You should take the doses at a proper time and avoid driving and other similar situations. Remember that it does not cause any severe dependency like that of prescription anxiolytics or sedative drugs.

It gently works on your system if you take its proper dose according to your body’s requirements.

How to take Ashwagandha for anxiety?

According to Examine.com, Nootriment.com and a study published in NCBI, if you are taking the ashwagandha powder for treating mild to moderate anxiety and depression then a daily dose of 300mg to 500 mg proves to be effective.

For those suffering from clinically diagnosed anxiety, a daily dose of 2000mg taken a day thrice is effective and safe.

How do I take Ashwagandha in powder form?

You can take the dry ashwagandha powder with warm milk. The dosage is ¼ to ½ teaspoons of ashwagandha mixed in milk with a teaspoon of honey.

This drink taken before going to bed helps to calm the mind and body and improves sleep. You can also blend it with equal parts of ghee and honey and take it for improving sleep.

This provides nourishment and complete rejuvenation. You can combine it with sugar and ghee to use it for supporting female reproductive system and joints.

How to take ashwagandha in tablets/capsules?

Since you will find a variety of Ashwagandha tablets in the market, the recommended dosage depends on the capsule or tablet that you are consuming.

How much ashwagandha powder/capsules should I take at a time and in a day?

The lowest ashwagandha dosage that is effective is 250mg to 300 mg taken a day thrice. This dose can be extended slowly to 6000mg a day depending on the effectiveness.

It is also recommended that the dose should be taken with meals and with plenty of water to avoid any unpleasant gastrointestinal effects.

The best recommended time to take ashwagandha is before going to bed at night with warm milk and honey. It will help your mind and body to relax while enabling you to have a sound sleep.

If you are using it twice a day, then take one dose in the morning with breakfast and the next dose in the evening or before going to bed.

The intake of Ashwagandha has many mental and physical health benefits. It is known to have very few and for most users no serious, side effects.

It is a well-tolerated and relatively safe over the counter supplement, but like any other drug, its use should be carefully monitored. Consulting your physician for proper dosage is beneficial. Some of the side effects include;

No remedy is a complete cure for your every problem. You cannot wholly rely on the use of ashwagandha for controlling anxiety and depression without practicing other anxiety control strategies.

If you wish to take ashwagandha in your daily regime, then it is better to do lots of research, read scientific literature and consult your physician for proper dosage and the choice of a form of ashwagandha.

How Do You Make Oat Straw Tea?