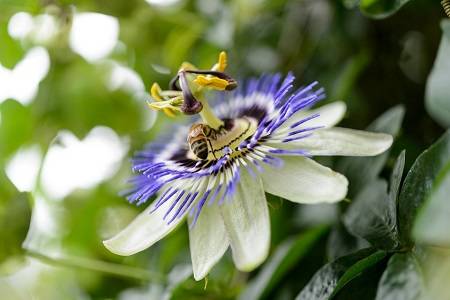 Passionflower, scientifically known as Passiflora incarnata and Passiflora edulis, is a flower known for its calming effects and sedative properties.

These flowers, once unknown to the greater world, are gaining popularity amongst those who seek a safer substitute for marijuana.

Until recently, marijuana was considered the only naturally occurring plant that produced a state of ‘high,’ but with the growing popularity of Passionflower, this belief is quickly changing.

Passion flowers are striking, large white flowers with pink or purple centers. They belong to the genus Passiflora, which contains about 550 species of flowering plants.

These flowers have a mostly Neotropic distribution, dominating the tropical terrestrial ecoregions of the Americas and the entire South American temperate zone.

The flowers grow on tendril-bearing woody or herbaceous vines that may be up to 10 m long, climbing up and over other plants in the rainforest canopy.

Most species of the flower have round or elongated edible fruits that are typically two to eight inches long and an inch or two across.

The plants were first discovered in 1569 by a group of Spanish explorers in Peru, who took them back to the old world, where they became a favorite for calming and sedative herb tea.

The flower was also believed to symbolize some of the objects associated with the Crucification of Christ and was used by European settlers to spread their religion.

How does Passionflower work?

Unlike Marijuana, Passionflower does not contain any cannabinoids such as tetrahydrocannabinol (THC).

The high that comes with Passionflower, however, is because of the three main chemicals called alkaloids (harmane, harmaline, and harmol), glycosides and flavonoids (apigenin and luteolin).

The flower also contains naturally occurring serotonin, which is a neurotransmitter that is believed to help regulate mood, social behavior, appetite, digestion, sleep, and memory.

Studies have proved that glycosides and flavonoids, when tested separately, do not exhibit any sedative properties.

This shows that the two chemicals must work simultaneously to achieve the analgesic properties of the flower. It has also been found that Passionflower contains high levels of gamma-aminobutyric acid (GABA), which inhibits neurotransmitters, reducing brain activity.

How to use Passionflower?

Passionflower is available in many different forms. It can be bought in the way of;

On adding these leaves into tea, the flower shows highly strong medicinal powers. The tea is used as a sedative and as a sleeping aid.

In these medicinal forms, Passionflower is usually used to promote relaxation.

What are the Health Benefits of Passionflower?

Passionflower offers most of the health benefits that individuals consuming marijuana might get. Like marijuana, it is famous for its analgesic and sedative properties.

For some people, it is also able to bring the feeling of euphoria, although the feeling isn’t believed to last as long.

The flower is also used to treat stress, insomnia, nervous disorders, alcoholism, muscle cramps, convulsions, hysteria, neuralgia, menstrual cramps, PMS, and as a pain reliever in various conditions. Among the many health benefits that the flower presents, the most well-known are;

As mentioned previously, Passion flowers contain gamma-aminobutyric acid, a chemical that acts on certain parts of the brain, reducing its activity level and causing a person to feel relaxed and calm. The compound also works as a sedative that brings about mild feelings of euphoria.

Must Read:  Can You Fly With Psychedelic Mushrooms?

It helps with anxiety problems

The results of a study published in the Journal of Clinical Pharmacy and Therapeutics in 2001, stated that Passionflower helps reduce anxiety.

This study was conducted on a group of 32 people that were suffering from a general anxiety disorder.

The individuals were treated daily with either 45 drops of passionflower liquid extract or 30 mg of oxazepam, which is a common anti-anxiety drug.

After four weeks, both groups had significantly progressed in their anxiety control, but none of the people taking passion flower reported severely impaired job performance, while 44% of the patients taking oxazepam did.

This experiment proves that Passionflower can be used as a natural substitute for over-the-counter anxiety drugs.

Because of its antispasmodic properties, Passionflower is known to relieve symptoms of asthma.

Recent studies show that Passionflower can act as an aphrodisiac. In a research conducted in 2003, a leaf extract from the flower was administered to laboratory mice. Results showed improved overall sexual function, increased sperm count, fertilization potential and litter size.

In parts of South America, the fruit juice of the flower, because of its sedative properties, is sought as a natural remedy to calm hyperactive children.

Side effects of Passionflower

Passionflower leaves are generally regarded as safe by the FDA. It can be administered to adults, children and even infants, but to avoid any side-effects the dosage has to be carefully monitored.

It is, however, advised that the flower should not be consumed during pregnancy or breastfeeding.

Also, if you have any medical conditions, do not take Passionflower without consulting your doctor first. It can interact with other drugs like anti-hypertensives, anxiolytics, painkillers and other medicines to evoke adverse effects.

How is Passionflower different from marijuana?

For many people, Passionflower presents the same symptoms as marijuana does, including relief from stress, anxiety, pain and a feeling of euphoria. These conditions are, however, very mild compared to those brought about by marijuana.

Some individuals have found a solution to this by increasing their daily intake and taking higher doses. This may help by temporarily making a person feel ‘high,’ but a lot of people have stated that Passionflower is not able to deliver the same effects that marijuana does.

While the impact of marijuana stays for about four to eight hours, the majority of people who took Passionflower were only able to get high for half an hour.

All in all, the flower can still be used by those who either do not want to end up with a bad hangover or have run out of marijuana.

No, it has been clearly stated above too, that some persons may experience a high after taking high doses of, but it is nothing compared to the high you get after taking Marijuana.

And, it is because of this property that Marijuana has all those legality issues and is a scheduled substance while Passionflower is not.

Previous article
Kratom Tinctures: How to Make and Use Them
Next article
How To Make A Homemade Bong?