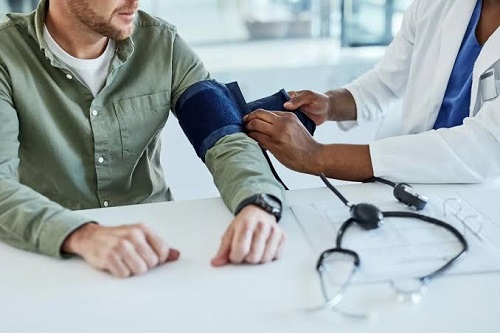 The debate is still going on regarding the association of CBD with blood pressure. It needs further research to claim that CBD lowers the blood pressure due to the small number of studies.

Many people are suffering from this symptomless condition-hypertension, and every individual wants to treat it.

However, pharmaceutical medications are available in the market, but all of them come with some side effects.

So, people, these days are choosing the natural remedies,i.e., CBD for controlling the blood pressure without any adverse effects.

So, what is CBD? The CBD or cannabidiol is a type of most common compound present in the Cannabis plant.

Unlike other cannabinoids such as THC, CBD is a non-psychoactive agent that provides relaxation without any intoxication.

There is much research going on regarding CBD which shows that it has likely effects as an antihypertensive agent.

The endocannabinoid system plays an essential role in regulating the body’s physiological functions which include the cardiovascular system.

The ongoing research indicates that the Anandamide is similar to the body’s natural production of THC which aids in relaxing the blood vessels, allowing the blood to flow more readily and helps in lowering the blood pressure.

According to Dr. W. Rivers, the cannabinoids in marijuana help in reducing the inflammation associated with the lining of blood vessels, resulting in lower blood pressure.

In which conditions CBD is helpful?

CBD helps in relieving the following conditions other than lowering the blood pressure:

What does hypertension indicate?

High blood pressure also termed as Hypertension results in an increased risk of stroke or heart disease; it is a type of symptomless condition which threatens a human’s health.

During hypertension, the blood flows at higher pressure through the arteries rather than the standard blood pressure.

However, there needs further research to conclude that CBD has beneficial effects while addressing cardiovascular conditions,i.e., high blood pressure.

Millions of adults are suffering from high blood pressure all around the world, i.e., 32% of adults in the US.

Hypertension leads to cardiovascular disorder if it is not treated which might be characterized by a heart attack, increased chances of stroke or might even lead to heart failure.

Multiple factors are involved in developing hypertension such as poor diet, physical inactivity, stress, tobacco use, and alcohol.

What are the causes of hypertension?

There are two different kinds of high blood pressure:

The excessive workload might result in this type of hypertension which is characterized by the fast pumping of the heart. Anandamide- a neurotransmitter plays a vital role in controlling heart functions.

The CBD aids in reducing the blood pressure by eliminating the source of inflammation. Due to the lifestyle, the swelling of arteries might occur with time resulting in tightening of blood passage.

Alcohol and drug abuse are directly associated with increased inflammation. CBD serves as a vasodilator which relaxes and widens the arteries allowing the rapid blood flow.

The patient needs to maintain the healthy lifestyle along with CBD consumption to remain healthy.

How to use CBD?

Start with a low dose,i.e., around 5mg and increase the dose gradually with time. Be careful with the extraction methods and quality standards to ensure the product quality.

What do the scientific studies say about the effects of CBD on lowering blood pressure?

The scientific studies and research are still prevailing regarding the association of CBD and its effects on the cardiovascular system.

Many studies are primarily focused on THC which is the psychoactive agent present in the Cannabis plant through which the CBD oil is extracted.

According to the study published in the Journal of Clinical investigation during the 1970’s, it is said that the CBD or Cannabidiol is a type of non-psychoactive compound that is used for relieving multiple sclerosis and epilepsy.

The preclinical studies indicate that CBD possesses various cardiovascular benefits which include reduced blood pressure in response to stress.

The study was conducted to identify whether CBD lowers blood pressure in humans or not. It was indicated that the non-psychoactive agent CBD helps in reducing the blood pressure after a single dose.

Nine male volunteers who were healthy consumed 600 mg of CBD or ingested placebo in a randomized fashion, double-blind, placebo-controlled, cross-over study investigated by the scientists at the University of Nottingham.

The parameters such as finometer along with the laser Doppler were used to assess the cardiovascular system including the skin blood flow, blood pressure, forearm stroke volume, and heart rate. The results varied, but there was a drop of 6 mm HG blood pressure in these participants.

According to the data, it was concluded that CBD aids in lowering the systolic blood pressure (pressure in the human’s blood vessels at heartbeat) at rest, in response to stress especially the cold stress and in the post-test periods.

These results showed that CBD has analgesic and anxiolytic effects along with the potential effects on the cardiovascular system.

CBD along with other cannabinoids from the cannabis plant serve as vasodilators, which means that these compounds release the tension in the arteries leading to more blood flow towards the organs.

The epidemiological studies show the association between the development of the cardiovascular disorder and long-term stress.

Factors example low socioeconomic status, social isolation, stressful work, and family life, depression and anxiety have a direct effect on accelerated progression and risk of the development of the cardiovascular disease.

The researchers came across some conclusions which need further research. CBD lowers the blood pressure but results in increased heart rate by 7-8 beats per minute which were coupled with decreased stroke volume.

The reduced stroke volume (amount of blood which is pumped by the left ventricle of the heart during one contraction) indicates that the heart needs to pump faster to provide the body with Oxygen-rich supply.

CBD helps in restoring the normal heart rhythm after an ischemic attack and aids in reducing the oxidative stress, size of the infarct, inflammation and maintains the performance of the left ventricle after a heart attack.

Hypertension is highly prevalent affecting almost one individual in every three adult patients. Hypertension lacks any association with the direct cause, but several factors are involved.

You need to avoid the consumption of unhealthy foods, stress, excessive alcohol and use of drugs example cigarettes.

A healthy lifestyle should be followed along with CBD consumption aids in reducing blood pressure.

Consult the doctor before stopping your medications or consuming CBD in combination with the prescription medicines.

So, to conclude CBD lowers the blood pressure but it needs further research to be entirely sure about it.

What Are CBD Cannabis Seeds and How Do They Work?