HomeKratomSalvia And Kratom: An Unbiased Comparison

Salvia And Kratom: An Unbiased Comparison 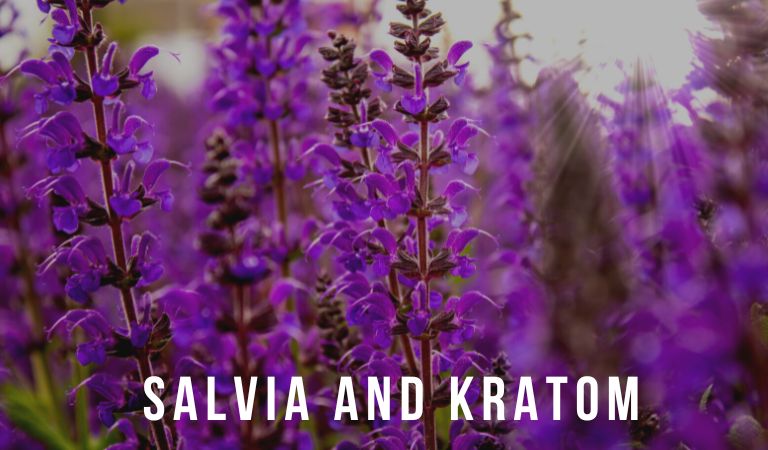 Salvia and Kratom, both from the plant family, have been traditionally used for centuries by people for different purposes. Do you want to compare these two and wonder which one is better or has better uses? If that is what you are here for, then in this article, we will be sharing all the comparisons between Salvia and Kratom to help you understand both of these plants in a better manner. Well, let us get to it right away!

Key Differences Between Salvia and Kratom

While both Salvia and Kratom have medicinal purposes and are from the plant family, both of these provide different uses and benefits. Mentioned below are their key differences:

Kratom which is also known as mitragyna, in scientific terms, is a tree that belongs to South East Asia and comes from the Rubiaceae family. This is a family of flowering plants, and they are commonly known as coffee, madder, and bedstraw. It includes trees, shrubs, lianas, and herbs with simple, whorled, and ovary leaves. Moreover, Kratom is popular in different countries, including Thailand, Indonesia, Malaysia as well as Myanmar and has been used since the 19th century.

On the other hand, Salvia is from the largest genus of plants from the sage family, known as Lamiaceae, and belongs to the kingdom of Plantae. Belonging to the Mentheae Tribe, it is recognized by multiple names such as Diviner’s Sage, Lady Salvia, Magic Mint, Purple Sticky, and Sage of the Seers.

It includes various species such as shrubs, annuals, and herbaceous perennials. Moreover, Salvia is commonly found in Southern Mexico, part of Central and South America, and Mediterranean Europe.

Salvia, which is a natural antibiotic and one of the most commonly used herbs in traditional medicine, can provide antioxidant and anti-inflammatory effects. It has been used to treat several problems such as digestion issues, circulation disturbances, excessive sweating, memory, and respiratory problems. It has a strong smell and an earthy flavor and offers all important vitamins, minerals, and nutrients for the body.

Moreover, it supports oral health, such as throat infections, dental cavities, and infected gums. Salvia leaves can also be a great remedy against diabetes and high blood sugar levels.

A plant that has been in use for hundreds of years in Asia, Kratom is sold in different forms, including dried leaves, powder, capsules, and supplements. It is commonly known to help relieve pain, sadness, and substance overuse or addiction.

It is a recreational stimulant that enhances the mood, helps improve fatigue, and is great at reducing muscle cramps. Also, it provides quick relief from uneasiness and worry and helps people stay calmer and relaxed so they can function properly in their day-to-day life.

Furthermore, it can be an excellent energy booster, making you feel more active, energetic, and motivated to improve the metabolic process.

Salvia vs. Kratom – Side Effects

While Salvia is known to offer a lot of health benefits and uses, there are potential after-effects that you should know of before use of Salvia. Salvia taken in excess can lead to several issues such as mood swings, unpredictable behavior, reduced diet intake, and falling asleep or waking up at odd times. It might also lead to reduced interest in physical appearance and increased concentration issues.

Must Read:  Where To Find Kratom Locally & Near You?

On the other hand, kratom has a few known side effects, including nausea, vomiting and muscle pain. Increased use may also affect the nervous system, including drowsiness and dizziness.

What Cultures Use Kratom and Salvia ?

Salvia has commonly been used among the people of Southern Mexico for spiritual and curative treatments due to its psychoactive effects. Also, the Mazatec use Salvia for their healing and divination ceremonies and as a flavoring for stuffing in different foods like pork and poultry, chicken, and meat.

People from Thailand, Indonesia, Malaysia, Myanmar, and Papua New Guinea have been using Kratom for various purposes since the 19th century. Historically, fishermen, farmers, and laborers in Northern Malaysia and Southern Thailand used Kratom for a variety of purposes, such as treating pain as it has anti-fatigue properties.

How Long Do Kratom and Salvia Stay in Your System ?

How long Kratom can stay in your system depends upon several factors, such as the following:

Moreover, the issue with Kratom is that its presence might not be detected even through sophisticated testing methods because it isn’t popular when it comes to drug abuse. However, there are special drug detection tests for Kratom, such as a 10-panel drug test which can deduct the drug in urine even if 7 days have passed.

On the other hand, when it comes to Salvia, it stays in your system for a very short time when compared to Kratom. Salvia lasts in your blood for only up to 12 hours and has a very short life as it clears up quickly from your blood. Furthermore, Salvia can be detected in a specialized drug test even 36 hours after use. When it comes to Salvia, hair follicle testing is unreliable because the drug leaves the body too easily.

In the United States, Kratom is not federally regulated, which means that there are no government checks on it as well as its purchase, including online buying. Some states have banned its purchase, growth, and selling, while others have allowed it with certain regulations.

States Where Kratom is Banned:

States Where Kratom is Legal: (With Regulations)

What are the Street Names for Salvia?

Street names for Salvia include:

So now that you know both Salvia and Kratom, what they offer, and what their side effects are, the questions come down to which one you prefer. You must have read that both of these provide different uses, which means you will use the one that suits you the most. As these substances and their legality are a bit disputed, their use depends upon where you live. Make sure to do your research before using any of these.