HomeUncategorizedTHC-O Vs THCP: Which Is Better 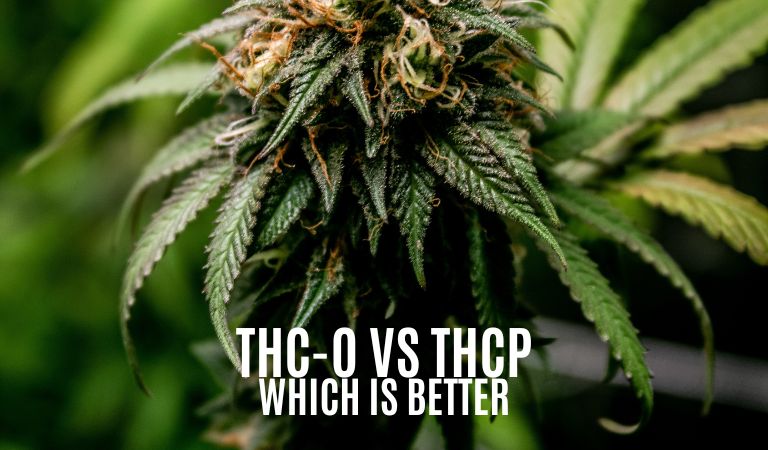 Chemical substances and variations of delta-9 THC include tetrahydrocannabiphorol (THCP) and THC acetate ester (THC-O). Inexperienced users who are not acclimated to cannabis or powerful highs shouldn’t consume THC-O and THCP individually or together. The safer and more pleasant alternative is Delta-8.

However, to compare them based on their potential, we must first fully comprehend each to determine which is stronger and which is weaker.

THC-O, also known as THC-O-acetate, is more potent than regular marijuana but feels comparable in small quantities; in big dosages, it becomes more euphoric and can make some users feel immobile.

THC-O is an analog of THC, while not being a fully natural cannabinoid. Its production is a lengthy and perhaps hazardous procedure. To begin, hemp is used to extract CBD. Then, the CBD is taken out and the Delta 8 is combined with acetic anhydride to produce THC-0.

Being a prodrug, THC-O-acetate is inert physiologically until the body metabolizes it. Compared to Delta 8 and Delta 9, THC-O may have a higher bioavailability, which means that the body can absorb more of it.

The potency of THC-O can be three times that of THC-9 (like delta 9.) Depending on the amount, it produces a psychotropic high that can be either energizing or calming.

THC-O-acetate is commonly referred to as the psychedelic cannabinoid because some users report having psychedelic experiences, moderate hallucinations, and visions. Additionally, it is supposed to elicit mystical feelings and more intense levels of introspection than regular THC.

Many people who use THC-O report one or more of the following effects:

Many users of this powerful cannabinoid report feeling joyful and content. Evidence regarding THC-medicinal O’s advantages is currently mostly anecdotal because there hasn’t been much study done on it. But the anecdotal data is encouraging.

THC-O is said by some users to have reduced stress and discomfort (which are commonly associated with other THC analogs.) Others who take it laud its ability to promote hunger and sleep.

Scientific clarification of the curative and therapeutic benefits of THC-O requires additional study.

Given how strong THC-O is, it becomes expected that certain users might have adverse side effects. In addition, research on THC-O is ongoing, thus much regarding its immediate and long-term impacts is yet unknown.

Here are a few THC-O negative effects, though:

The laws governing cannabis and marijuana in the US are convoluted. THC-O rules are considerably harder to understand and may be confusing.

As long as it comes from hemp, THC-O is not an illegal substance in the US. The 2018 Farm Bill permits hemp (cannabis with less than 0.3 percent THC) and its byproducts. Schedule 1 substances include marijuana and cannabis products with more than 0.3 percent delta 9 THC.

It is believed to have 33 times more cannabinoid 1 (CB1) receptor activity than THC, resulting in a potent and overwhelming euphoric feeling.

The legality of THCP is constrained by incompatible federal laws. The 2018 Farm Bill could protect because it isn’t specifically designated as a restricted drug. However, many consider it to be unlawful and fall under the Federal Analogue Act (FAA).

There is a major uproar due to the discovery of THCP. Just the idea of a cannabinoid that is more potent than THC is sufficient to send the cannabis community into a complete frenzy.

A lot of people who have used THCP say it has effects similar to THC, but stronger. You require a lesser amount of it because it’s stronger (nearly psychedelic), therefore it has different effects from THC.

People who have used THCP indicate that its impacts are nearly identical to those of THC, despite the paucity of a recent study on the substance’s effects.

Outside of the findings provided by the initial research that identified the cannabinoid, there is presently no research on HCP, which is still a relatively new compound in the cannabis field. The findings and prospective medicinal uses are encouraging despite this.

Patients who need high THC doses for their treatment, for instance, those who already use Rick Simpson Oil (RSO) to treat cancer, may get more significant pain reduction from THCP. Higher THCP concentrations may also have sedative effects akin to those of high THC dosages, and they may be able to treat chronic pain or ease sleeplessness.

It’s unclear exactly what THCP’s detrimental consequences are. Again, as THCP is a novel cannabinoid, its negative effects, both immediate and cumulative, have not yet been thoroughly documented.

Yet, since THCP and THC are comparable, we may infer that their adverse effects are also comparable. Typical THC detrimental consequences include:

The only substance that appears to be classified by the Convention on Psychotropic Substances is delta 9 THC, making THCP legal around the world. In contrast to other countries, THCP sale is legal in the US as long as it is derived from hemp plants as opposed to marijuana plants. This is rarely the case, especially when talking about THC. While THCP is permitted on a federal level, various state laws may apply to it because each state is free to create its cannabis regulations.

Although THC-O is a THC analog, it is produced from hemp and is therefore permitted. However, and this is the problem, the DEA significantly strengthened the legislation by stating that all synthetic THC is illegal. Even though delta 8 and delta 10 are naturally occurring, several states are utilizing this law to ban their usage. THC-legality O’s is now depending on personal preference and is rather ambiguous.

Which one is stronger? Let’s Differentiate between THC-O vs THCP

A man-made cannabinoid is called THC-O.

An organic phytocannabinoid is called THCP.

The THCP Currently Sold Is Most Likely Semi-Synthetic

More than likely, the THCP for sale currently available on the marketplace is semi-synthetic.

As a result, it is created by the chemical conversion of CBD to Delta 8 and subsequently to THCP. Because hemp only contains extremely small amounts of THCP, that is now the only commercially viable strategy.

To be accurate, it is 33 times stronger than Delta 9 THC. Period. THCP has a significantly higher potency than THC-O. Because of this, relatively little THCP is required to produce powerful effects.

Be cautious because more CB receptor binding isn’t necessarily a good thing and might result in more negative consequences.

The Effect Of THC-O Acetate Is Slow

When breathed, THC-O requires a minimum of 30 minutes to start working. But when it comes to THC-O edibles, the high comes on even more gradually. However, the THC-O high also tends to linger longer than the THCP high.

Why Is The High Effects From THCP Stronger Than THC-O?

A sequence of carbon atoms known as an alkyl side chain sometimes referred to as the “main chain” or “backbone,” describes how a cannabinoid connects with the receptors in your body, especially the cannabinoid receptors.

When deciding between THCO and THCP, which would you pick?

In actuality, this query is only some fuel for contemplation. But as with everything related to cannabis, your decision on which cannabinoid best suits your preferences is, of course, totally personal.

Both THCP and THCO deliver a certain buzz that must be encountered to be fully understood.

Please keep in mind that there are still many unanswered questions in research regarding the possible long-term impacts of the semi-synthetic cannabinoids created in this new era of hemp transformations. So, indulge at your peril.

Previous article
Best Kratom For Camping And Backpacking
Next article
Agmatine and Kratom Combination: Is This Good or Bad?