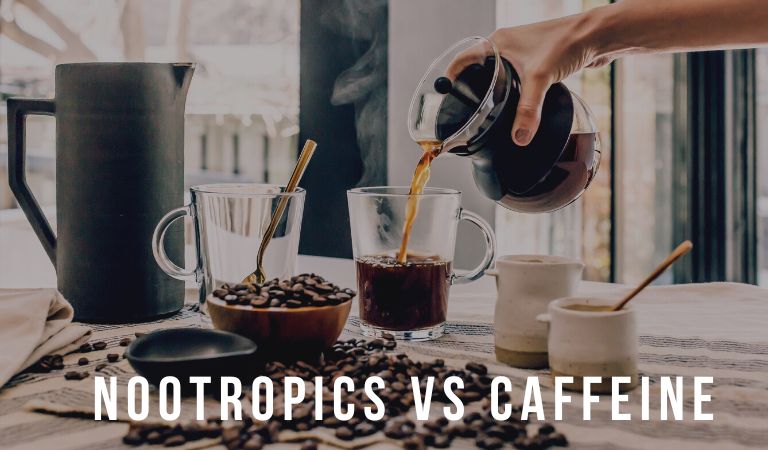 In this review, we are going to compare nootropics vs caffeine regarding their similarities and differences and much more. However, first, we need to understand caffeine and nootropics.

Caffeine and nootropics are substances that activate brain functioning and improve the span of attention and concentration of consumers. Caffeine is a natural substance and contains stimulating properties on the other hand nootropic is a synthetic substance or a drug that increases cognition. Both contain their potential benefits and adverse effects but nootropics are more effective and less harmful for consumers.

Nootropic has undoubtedly been a phrase that you’ve heard a lot lately. Right now, it’s a popular word. The Merriam-Webster Dictionary defines a nootropic as a drug that improves cognition, memory, and learning. Informal dictionaries erroneously refer to them as “smart drugs.”

The terms “nous” and “tropein,” which both mean “thought,” and “to bend or turn,” respectively, are the roots of the word “nootropic.” Nootropics, also called “smart medications,” belong to a group of pharmaceuticals that increase brain functioning. Some people refer to them as drugs that improve cognition or memory. Medicines with stimulating effects and prescription nootropics are available. The signs of illnesses can be mitigated including Alzheimer’s disease, narcolepsy, and attention deficit hyperactivity disorder (ADHD).

Another class of nootropics is the racetams, which include the drug piracetam. These substances have been shown to act on neurotransmitters such as acetylcholine and improve cognitive function in the elderly. Modafinil is an additional class of prescription stimulants (Provigil). It is FDA-approved for the treatment of narcolepsy, sleep apnea, and shift work disorder, although studies have shown it may benefit memory and cognition in healthy individuals.

Side Effects of Nootropics

An excess of nootropics can change your brain’s structure and blood flow, as well as your cognition and sleep habits, all of which can lead to insomnia. In addition to altering metabolism, possible nootropics can potentially produce gastrointestinal disturbances.

The central nervous system, the heart, the muscles, and the areas that regulate blood pressure are all stimulated by caffeine. Caffeine is most frequently used by people to increase mental alertness, relieve pain and improve memory, sports performance, and obesity. Additionally, it is used to treat depression, ADHD, low blood pressure, asthma, and gallbladder disease.

Here, we go a little more into the many forms of caffeine from both natural and artificial sources, beginning with the most well-known.

Must Read:  Huperzine A – A Natural Nootropic for Students To Enhance Memory And Cognition By

Caffeine’s stimulating properties have been linked to several health advantages including:

Side Effects of Caffeine

Up to 400 mg of caffeine per day is generally not dangerous. Caffeine can harm your health if you consume or consume it in excess.

Nootropics vs Caffeine – Similarities And Differences

Caffeine and nootropics are two different types of drugs, still, both have potential benefits that increase cognition, such as increased brain activity. Along with boosting alertness, they both also elevated anxiety and enhanced focus. Caffeine is present in certain nootropics, though. However, it isn’t frequently utilized as the primary component. To further boost brain activity, certain brain boosters contain trace amounts of coffee.

For those wishing to improve memory and alertness, Nootropics vs. Coffee contrasts two well-known cognitive enhancers.

You can frequently use brain supplements called nootropic substances to improve your cognitive function. it is a natural drug that has no or few side effects.

Contrarily, coffee has several bioactive chemicals that are advantageous for cerebral blood flow, cognition, and psychomotor functioning. It is also a natural substance but contains acute and chronic adverse effects. Some individuals are more prone to the substances in coffee than others, but coffee can enhance cognition and boost energy levels. As a result, it is well recognized to produce jitters, crashes, withdrawal, and insufficient sleep in many people.

Nootropics are found to be more effective for cognition than caffeine due to their non-tolerance properties and fewer risk factors and also can be taken regularly as dietary supplements.

Although caffeine is more harmful than nootropics, still mostly consumers take it on a regular basis.

Other different substances such as tea, coffee, and chocolate contain caffeine. On the other hand, nootropics can only be found in dietary supplements and perceived drugs.

Which One Is More Beneficial?

The efficacy of caffeine and nootropics have shown conflicting findings. According to the research, caffeine is superior to brain-boost drugs like nootropics in terms of effectiveness. However, alternative nootropics are shown to be beneficial and have fewer side effects than caffeine.

Beneficial nootropics are made from natural substances that have minimal to no negative side effects and improve cognition. They often don’t include stimulants like coffee, which have negative consequences. This is why they are better for cognition than coffee.

Although coffee may be a good temporary mental and physical energy booster, the adverse effects may not be worth it when compared to naturally occurring nootropics or natural cognitive enhancers, which have practically no adverse effects.

Which One Is More Harmful?

Caffeine can be detrimental for a brief period if taken in doses of 600 mg or more, but if these doses are exceeded, persistent health problems such as dependence, sleeplessness, migraines, and irregular heartbeat may result.

Headaches, heightened motor activity, a rapid heartbeat, nausea, and tremors can be symptoms of caffeine withdrawal. Combining any other substance with caffeine might be fatal for the consumer. Caffeine itself is highly addictive and easily becomes tolerant due to its energizing properties and high risk of acute cardiac problems. Although coffee might influence your ability to absorb nutrients, avoiding it for an hour before and after taking your supplement ensures that there won’t be any bad effects.

On the other hand, true nootropics are typically side effects free but potential risk factors or adverse effects can occur if it is taken in high doses or supplements or taken these drugs illegally. Adverse effects include high blood pressure, palpitations, insomnia, addiction, and problems in the circulatory system.

Thus, the aforementioned statements provide us a clear understanding of the drug that is most likely to be hazardous, which is caffeine. Caffeine may cause several acute and long-term health issues without exceeding recommended doses, which ultimately has an impact on your quality of life.

In the end, nootropics can improve cognition while posing a lower risk of negative side effects than coffee. Despite being a potent, energetic beverage full of bioactive components for a rapid cognitive fix, coffee isn’t exactly sustainable.

Both have their benefits and drawbacks, but it’s vital to realize that whether you’re using coffee or nootropics, you should use caution because an excessive amount or an addiction may have serious negative consequences on your health. A healthy lifestyle can help you achieve higher performance and more positive results.