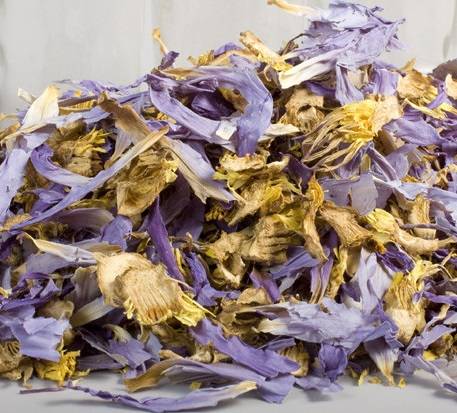 Since medieval times, herbs and roots with properties that induced states of euphoria have been popular. Most of these herbs were used in ceremonies and rituals to kick start the mood of everyone in attendance. The authenticity of their use has been depicted in paintings found from the Nile civilization in which Egyptians were shown to use the drug Blue Lotus.

This traditional use of the blue lotus has been carried on to the twenty-first century, where people were curious to experiment with this psychoactive drug which their ancestors had meddled with, years before them.

What is Blue Lotus?

Blue Lotus, generically also known as Nymphaea caerulea is a water lily known to the Ancient Egyptians to contain the psychoactive alkaloid apomorphine. Fortunately, enough, this plant has extended from the Nile to the Indian subcontinent and Thailand. These pale blue lilies have been known to bloom in the morning and close at dusk.

The Blue Lotus is unique in the sense that it has a high repute for such a subtle plant. The effects and sensations are known to vary from person to person, while some of the most uniform effects are discussed here.

Must Read:  How To Take Ashwagandha Powder? Dosage For Anxiety & Stress

On its own, Blue Lotus does not have any major harmful effects. The most commonly seen are hot flashes and mild jittery feelings to high doses.

The real adverse effects start to creep in when the blue lotus is combined with other stronger drugs, such as cannabis or prescription painkillers. Feelings of nausea and disorientation may commonly be reported.

Dosage: The standard dosages have set at 3 ml. This dose can be taken by 4-5 eyedroppers full and kept in the mouth for 20 seconds after which it is finally ingested.

The importance of holding it in the mouth is due to the oral membranes and throat provide an efficient route of absorption. A second dose is only allowed after 5-10 minutes.

Suggested Cautions:  It is advised to bear caution in use while driving or operating heavy machinery. This might be due to the reason that it contains 8% content of alcohol. Blue Lotus should not often be used, for there is a chance of losing its potency.

Users have reported psychedelic like effects. A certain user ingesting a low dose (only one flower) said his whole ordeal. The first reported feelings were warmth in the upper body, followed by stimulating effects of general well-being and lethargy experienced after a massage.

Nearing to its end the user felt its aphrodisiac effects kick starting up a bit. All these effects subsided after around two and a half hours.

Another user who reported similar effects also reported an additional finding. This user mixed blue lotus with alcohol which leads to a deep sleep with vivid dreams.

Blue Lotus has been slightly controversial in its legality status. Although legal in most the countries, still its use must fall within some distinct regulations.

On the other hand, some countries such as Latvia, Poland, and Russia have jointly enforced a ban on this drug since 2009. A sizable amount of penalty is to be charged if anyone is found to be in possession of these medicinal products in any form. This drug still has not been approved for human consumption by FDA of the USA.