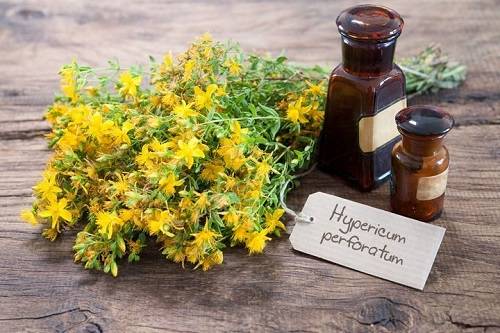 Anxiety and depression are common epidemics, nowadays. Every person is suffering from stress in the modern mechanical world of today. There are numerous reasons for these conditions.

People often look for means of overcoming their conditions which include medication and therapies. The chemical based drugs have many other side effects besides treating anxiety and depression.

Therefore, more and more individuals are searching for treatments that are more effective and have fewer side effects.

What is St John’s wort?

St. John’s wort is a herb that was used for the treatment of various health issues predominantly anxiety and depression in Europe. It is scientifically called Hypericum perforatum.

It is also referred to as Perforate St. John’s wort or Klamath weed Tipton’s Weed. It is a kind of flowery shrub bears yellow colored flowers that have oval and elongated petals. The flowers, as well as leaves, are useful for their medicinal value.

St. John’s Wort is a distinctive type of antidepressant that is quite effective, affordable and is available as an over-the-counter herbal supplement in the form of tea, tablets, topical treatment, and capsules.

It has been used for the medical purposes since the ancient times. At that time, it was used for the treatment of low energy levels, mood, and poor sleeping.

How does St John’s wort work?

The plant is known to have active chemical component hypericin while others include hyperforin and flavonoids.

How St. John’s work for the treatment of anxiety and depression is not precisely known, but it most likely works as a selective serotonin reuptake inhibitor (SSRI) like fluoxetine, or Prozac which helps to increase the secretion of the chemical in the brain such as dopamine, serotonin, and norepinephrine.

These are neurotransmitters that help to elevate mood. Previously it was believed that hypericin is only responsible for it, but now studies suggest that other chemicals may also play a role in decreasing depression and improve mood.

Not all the research studies, however, agree with the effectiveness of St. John’s wort for anxiety and depression.

But these studies have also been weighed against the studies that show its efficacy similar to that of drugs like Prozac, Celexa, paroxetine (Paxil), and Zoloft.

The use of st. john’s wort for anxiety and depression treatment has been widely studies in numerous scientific research studies. There are mixed studies that show its effectiveness for anxiety treatment.

Must Read:  What Is Korean Red Ginseng And Where To Buy It?

The use of St. John’s wort has also been researched for the treatment of various mood disorders like severe depression, OCD (obsessive-compulsive disorders), seasonal effective mood disorders and anxiety disorders.

However, the research studies conducted to show effectiveness for these uses have not given any substantial evidence in its support, so far.

It is available in various forms including powder, capsules, tea, tinctures and skin lotions with the oil base.

You can also find it in chopped and powdered form. Most of these products are standardized to have 0.3% of hypericin.

Dosage of St. John’s wort for anxiety and depression

According to WebMD.com, University of Maryland Medical Center, Anxiety anddepressionguide.org and NCBI study, for treatment of depression, the standard dosage is 300 mg for adults (0.3% of hypericin extract) taken a day thrice.

After preliminary treatment, many people choose a lower maintenance dose of St. John’s wort that is from 300mg to 600mg a day.

If you intend to take its tea or in a liquid form, then it is better to consult your physician to determine the suitable dose.

It may be from 3 to 6 weeks until you start experiencing the effects of St. John’s Wort.

There are few temporary side effects of St. John’s wort which may occur. If you take it in recommended doses, then side effects are minimal. Some of the common side effects include;

In following cases, the use of St. John’s wort is not recommended for:

If you are already on some medication, it is necessary that you consult your doctor before using  St. John’s wort because of its interactions with various kinds of medicines which include but not limited to;