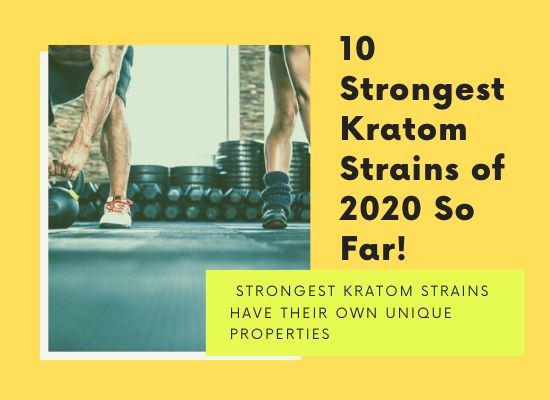 Which Kratom strain is the strongest? This is one question that pops in every user’s mind as well as in forums for herbal remedies.

Scientifically known as Mitragyna Speciosa, the herb is popular for both – the medicinal benefits as well as recreational pleasure it offers.

Naturally, the evergreen plant-like tree is enriched with alkaloids that help in pain and relieve users from opiate-dependency as well.

Additionally, Kratom is known to increase energy levels, uplift the user’s mood, and help ward off symptoms of insomnia.

It is part of the Thai culture for hundreds of years where local men are said to chew 10 – 60 Kratom leaves as the snack.

Since the last decade, Kratom users are increasing worldwide and with the rise in popularity, the number of different strains has also increased.

The different types of strongest Kratom strains have their own unique properties.

While some are useful in alleviating pain, others are used to enhance a sense of calmness. Moreover, strain to increase energy and fight fatigue is also available.

Why are Kratom strains different?

The effects of Kratom vary in each strain, depending upon their locations.

Each country that cultivates Kratom follows their particular geography and climate which thus changes the composition of strain.

The change in Kratom strain shows different effects which determine the potency of each strain.

Choosing among the strongest strains of Kratom

Choosing one out of the many Kratom strain is difficult and most users on herbal forums suggest novice ones to try out each strain one by one to find the best suited.

However, if you are opting to use Kratom for a particular problem then we suggest you select the strain with the highest ability to treat the specific issue.

For example, if your main aim is to use Kratom for the analgesic or pain-relieving effect, then go for strongest Kratom strains with the highest analgesic properties.

Although, selecting one strong Kratom out of many may be a difficult choice.

As we discussed above, all strains are different and while some are best for one purpose, the others will be beneficial for another.

However, to help new users as well as the experienced ones, we have compiled a list of top 10 strongest Kratom strains that are considered as the best.

The list of Kratom strains can never disappoint you and when used responsibly, they will enhance your experience with the herb.

By far, Maeng Da has been known to be one of the strongest Kratom strain. This is because the particular strain is high in both the alkaloids – mitragynine and 7-hydroxy mitragynine.This means that when Maeng Da Kratom is taken, the user can experience the best of both worlds – higher euphoric feeling and pain relief.In fact, Maeng Da users report having more energy as well.

If pain relief is your ultimate need, then white Bali is a perfect choice.The high content of 7-hydroxy mitragynine in white Bali works as pain receptors and gives users relief from pain by altering the pain pathway.It also enhances the production of enkephalins and endorphins which further increases the effects of analgesia.

Must Read:  What Are The Health Risks Of Kratom On Liver?

Red Bali is your friend if you are looking for an enhanced euphoric feeling.Although it is named as Bali, the strain is cultivated in Borneo and for many years, the farmer came to Bali – a trading hub to sell it. This is why it is called the Red Bali Kratom. User reviews on Reddit also claim that Red Bali is very strong and relaxes the mind and the body.It is primarily used to treat symptoms of depression, anxiety, insomnia, and lack of concentration.

The Borneo strain is known for its pain-relieving properties and many cancers, as well as arthritis patient, prefer this specific strain to reduce the on-going pain.Borneo is also ideal for those who experience anxiety and panic attacks as users claim it to create a sense of relaxation and comfort.However, Borneo can also produce a sedating effect if not used with caution.

White Indo – The Most Active Kratom

The Indo Kratom is the only strain which can match the dual-benefits of Maeng Da. Along with pain-relieving properties; Maeng Da creates a sense of euphoria in the users.However, unlike Maeng Da, Indo Kratom is sedating which is why many users utilize this herb for anxiety, stress, and mood disorders.

As the name suggests, the super green Malay Kratom originates from Malaysia.The strain is a blend of analgesic as well as sedation which means users can use it for both – pain relief and insomnia. Overall, the super green Malay provides energy to the overall body reducing the symptoms of anxiety and depression.

undoubtedly one of the best and strongest Kratom strain for energy, the Thai Kratom has the highest content of mitragynine which enhances its energy-producing properties.

Although, the Kratom native of the island of Sumatra may not be as popular as Maeng Da and Bali it does produce the same effects.In fact, the pain-relief of the Kratom is quite immense and users can take the herb for the many other benefits including relieving anxiety, easing insomnia, and good overall experience.

The Red Indo works similarly to the over-the-counter medicine Tylenol.However, unlike the medicine, it does not produce addiction which is why many users prefer the herb for chronic pain.And although it does produce sedative feeling, there is no lethargy reported by users and most comment that they can easily carry out daily tasks when under the effects of Red Indo Kratom.

These were the top Kratom strains of 2018 that every user should know about. The choice you make for your own use depends mainly upon your tolerance level as well as your desired effect.

Previous article
What are CBD Gummy Bears And Why People Are Turning To It?
Next article
Authentic Kratom Company Review