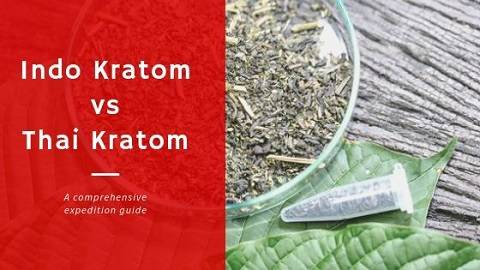 White vein Thai represents the leaves from a particular area that is Thailand. White Indo Kratom shows white vein leaves from Indonesia. Despite both being white leaves, there is something which is not the same for both.

That is the area of growth that gives specific traits to its flora. This article will elaborate on the differences and similarities between white Thai and white Indo strains of Kratom in detail.

How to tell if Kratom is a white vein?

After someone knows about the white leaves, the first question that arises to the mind is, what is a white leaf? We see leaves of green color. The leaves have distinct lines which are called veins. These leaf veins are patterns that are on every leaf.

In the case of Kratom, the typical leaves are green. Amazingly there are two more colors that signify different effects. Normally there are three types of colors which Kratom leaves have in them. They are red, green and white. The color white shows an energetic, relaxing and neutral sensation and that’s what it brings to its users.

What are the general effects of white vein leaves?

All white vein leaves show similar results. However, the personal consequences of each strain are variable. It is the strain alkaloids that give certain effects to each strain.

More than that it is a user profile that determines which results will show up on him. The most common effects of white leaves are energy boost, nootropic assistance, endurance and stress relief.

White Kratom for energy and stimulation

The most visible signs of the effects of white leaves Kratom is to feel a quick energy boost. The online forums where the users share their experiences show that Kratom white vein is so energetic that users are replacing it with their regular morning coffee.

The stimulation of white vein leaves is much stable and cleaner than artificial stimulants. A few white strains also show endurance for which users take it before performing a rigorous physical workout.

Probably it is one of the best effects of Kratom that it boosts the body not physically but mentally. Some of the most common things to feel are memory increase, concentration, motivation and focus building.

The nootropic effect is parallel to stress relief.  Many users experience it but the potency is not that high. However, it is not useful for long term depression or anxiety relief.

What is White Indo Kratom?

White Indo Kratom shows the white vein leaves from Indonesia. Indonesia is by far the biggest exporter of Kratom. The reason is that Indonesian Kratom has excellent effects. The climate and soil condition of Indonesia is ideal for the cultivation of Kratom.

The factors such as humidity, sunlight and rainfall are favorable when it comes to Kratom. There is not just white vein but red and green vein leaves also grow here. For now, the focus is only on white vein leaves.

What is white vein Thai Kratom?

Another amazing white vein type of Kratom grows in Thailand and is famous by the name of white vein Thai. This strain means the white leaves which grow in dense forests of Thailand.

Like other types, white Thai is also unique by its effects. It looks similar to other white vein but the effects may vary. Thailand also has favorable climatic conditions and soil for Kratom growth. The thing is that no two regions and their climate are identically the same. For which the Thai strains show slightly different properties.

Differences in white Thai and white Indo varieties by region

Indo strains are all strains that grow in Indonesia. It includes various types which are mostly called the name of their particular area of growth. Two major regions where Indo Kratom grows are Sumatra and Borneo.

Sumatra is a huge island with a population of millions of people. It has rich a thick rainforests where a variety of plant species grow. The natives harvest these strains for many centuries and now exports it commercially.

Borneo is an equally big island that has such a high population. It has its own special type of Kratom which is available in white, green and red vein leaves.

Thai strains grow all along the region of Thailand. Like Indonesia, Thailand is also an ancient cultivator of Kratom. But for the transportation of Kratom Indonesia has more fame. Even That strains also transport through Indonesian ports. One of the effective white vein Thai strains is white Maeng Da.

What are the effects of white Indo Kratom?

Indonesia is one country but it has several regions inside it. The Kratom which grows to these particular regions is famous by the respective names. For example, there are three big names among Indo white vein leaves.

White vein Borneo: It grows on an island called Borneo. It is a big island and the environmental conditions differ a little with the rest of the country.  The effects of white vein Borneo are stress relief, depression relief, anti-anxiety, reduces fatigue and improve cognitive functioning.

White vein Sumatra: Sumatra is another island that comes under the territory of Indonesia. The Kratom that grows here is called white Sumatra Kratom. This particular type of leaves works best as a natural nootropic then all other native Indo strains.

White vein Riau: The southwest region of Sumatra shows a different type of Kratom growth. It is famous by the name of the white vein Riau Kratom. The difference between Riau and Sumatra Kratom is that Riau has a sweeter taste. It has highly energetic effects along with a cognitive boost. It makes a perfect choice for everyday use.

What are the effects of white Thai Kratom?

For white Thai Kratom, the amazing benefits are energy production. The energetic effect of Thai white leaves is so intense and it usually has sedation with it. This sedation is not a part of all white vein Kratom strains.

For people who want a sedative energy boost, white Thai is the thing to try. The effects don’t end up here. The white vein leaves are also effective for providing motivation and inspiration for tedious work. The painkilling effect is minimal with white vein leaves. Only one strain, white Maeng Da has some analgesic effect to offer.

The difference in dosage among Thai and Indo strain

The dosage for both Thai and Indo is the same as both are white veins. Following is the general dosage guideline of white Kratom.

1-3 grams– It is the beginner dosage which is good for the first-timers only. The effects last for 4-5 hours. For all others, it may show a minimum or no effect.

3-5 grams– It is a moderate dose which provides energizing effects. It improves the mood, stabilizes the emotions, enhances concentration with mild stimulation. The effects last for 4-5 hours.

7-10 grams– It is a high dose which shows extremely relaxing effects. Almost all the effects of white veins rest inside it. It lasts for 5-6 hours.

For the new users, the effect lasts up to 4 or 6 hours and sometimes more than that. The individual health status indicates the duration of these effects. Generally, the effects of moderate and high doses last longer.

Conclusion- Which strain you should use?

Both Indo and Thai strains of Kratom are equally powerful for similar reasons. The difference is only among a minor concentration of alkaloids and a few effects. If you want non-sedative energy to come, Indo white veins are best to use.

For slightly pain-relieving and sedative effects, Thai strains are better to use. Overall both show up productive effects and even the same dosage works for both of them.

Key Features Of Yellow Vein Kratom – What To Expect From This Strain?