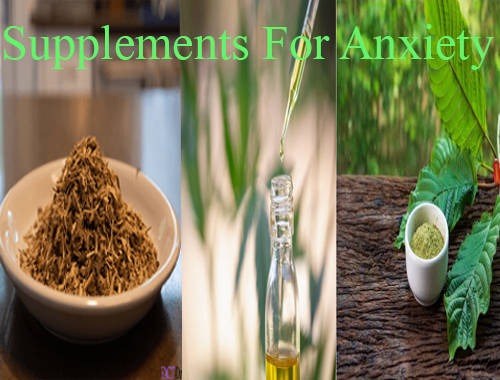 Anxiety is a critical problem that affects nearly everyone in their lives. Therefore, we want to effectively deal with it in order to make our lives better and more productive. There are various situations in life that cause anxiety. If the condition aggravates it leads to anxiety disorders, depression, and severe stress.

If you leave anxiety unattended, it harms physical, social, emotional, and work life. Due to this, many different ways, including medication and therapies, have been introduced for the treatment of anxiety.

For the past many years, Benzodiazepines were used for treating anxiety conditions, but their use leads to other problems.

That is why people started to search for alternative ways to treat anxiety. Various herbal supplements have discovered that help to cure anxiety without causing drug dependence or other health problems.

Some of the popular herbal supplements for anxiety

Fortunately, many herbal supplements help to treat anxiety. You can take these supplements to help you calm down during the anxiety attacks.

It is one of the popular herbal supplements that are known for having calming effects since ancient times. It is a tropical tree that is generally found in the Southeast Asian region. It is a member of a Rubiaceae family.

It is a stimulating agent that has an uplifting effect on your mood and helps to enhance the energy levels of the brain. Due to these characteristics, it is effectively used as a pain relief medication as well as an antidepressant.

Kratom primarily acts as an anxiolytic as it affects the pathways that change the GABA and endorphin levels within the CNS (Central Nervous System). The study titled “Pharmacology of Kratom: An Emerging Botanical Agent With Stimulant, Analgesic and Opioid-Like Effects” in   ‘The Journal of the American Osteopathic Association’ (Dec 2012) found that the leaves of Kratom produce a complicated kind of stimulant and has an analgesic effect that is similar to opioid.

How Kratom helps in reducing anxiety?

As Kratom has an anxiolytic action, it effectively helps in calming and treating anxiety issues. There are two major alkaloid components in Kratom, which include mitragynine and 7-hydroxy mitragynine. Both of these affect the kappa and mu receptors in the brain at low and high doses, respectively.

These alkaloids have an agonist action on opioid receptors, which results in releasing endorphins, serotonin, and GABA, which is an inhibitory neurotransmitter. Due to the release of these neurotransmitters, the levels of anxiety reduced. It has a positive impact on the working of the sympathetic nervous system.

There are different strains of Kratom available out of which white and green have been found to be most effective for treatment of anxiety.

However, different individuals have different subjective experiences with Kratom, and it is worth trying which strain works best for your anxiety treatment.

The Kratomclinic.com recommends starting with a low dosage from 0.5-1 gm and gradually increasing it until you find the dose which works perfectly for your condition.

Often referred to as Kava Kava is a plant root that is present in different countries of the South and Western Pacific regions. Its generic name is Piper Methysticum meaning ‘intoxicating pepper.’ It is known for its relaxing effects and is useful for treating anxiety, stress, and insomnia.

The clinical study, “Kava in the Treatment of Generalized Anxiety Disorder,” established that Kava significantly helps to reduce symptoms of anxiety among those who suffer from anxiety conditions. Another research study, “Kava for the treatment of generalised anxiety disorder (K-GAD): study protocol for a randomised controlled trial,” affirmed the findings that Kava is significant for the treatment of anxiety-related disorders.

Kava has a similar effect as that of benzodiazepines and tranquilizers but does not develop dependence and intolerance to it due to which it is the best choice for treating anxiety conditions.

How does Kava act?

The active components of Kava are called kavalactones that are known as phytonutrients. It is also referred to as ‘Nature’s Valium’ because of its effectiveness against anxiety, stress, panic attacks, and phobias.

Must Read:  The 3 Best Kratom Strains To Maximize Productivity

The intake of Kava increases GABA ‘A’ receptors activity. It is known as an inhibitory neurotransmitter in the CNS (Central Nervous System) reducing the firing of neurons nerve impulse activity. This means that the Kava potentiates GABA action in a similar way as that of benzodiazepines.

Kava also helps in reducing noradrenaline or norepinephrine activity, which is responsible for increased neural activity in the brain leading to anxiety and rapid breathing.

It promotes dopamine and serotonin release while activating the glutaminergic pathways. It is also known to suppress the pain pathways to some extent. It is the major kavalactone that helps alleviate anxiety.

Dosage of Kava for anxiety

The Kava can be taken in tea, capsule, or liquid form. According to Examine.com and the article published in NCBI studying the ‘KAVA treatment in anxiety patients’, in whichever form you take it, the dosage should not increase 250mg to 300mg on a daily basis.

CBD or Cannabidiol oil helps in relieving the symptoms of anxiety. It is a cannabis compound that has shown many medicinal health benefits. It is a kind of cannabinoid that is a chemical compound present in hemp and marijuana plants naturally.

Unlike tetrahydrocannabinol (THC), another kind of cannabinoid, CBD, does not cause any type of intoxicating feelings or the “high,” which is generally associated with the use of cannabis.

How does CBD oil work for anxiety?

CBD is though, attach itself to specific brain receptors called CBD1. The precise mechanism of how it affects the CB1 receptors is not fully known; however, it is believed to change the serotonin signals, which play an essential role in the maintenance of mental health.

The low levels of serotonin are known to cause depression and anxiety among people. CBD may act as an alternative to selective serotonin reuptake inhibitors that helps in the management of anxiety.

The CB1 receptors that are present in the brain are mainly responsible for emotions, cognition, coordination and movement, feelings, mood, pain, thinking, etc.

Various research studies have shown the effectiveness of CBD for the treatment of anxiety and depression. A survey conducted by National Institute of Drug Abuse has demonstrated that CBD reduced stress levels among animals. Another study conducted in 2011 and published in Journal of Psychopharmacology showed that the group which took CBD dose had an overall decrease in the levels of anxiety.

The dosage largely depends on the source of CBD oil. The research on the dose of CBD oil is still in its early stage. Therefore, it is difficult to recommend any specific dose for individual cases. The dosage also depends on different factors such as age, the extent of anxiety, and the strength of oil itself.

For a general idea, it is always better to start with a low dosage of CBD oil starting with 40mg/day. Then maintain that dosage for at least a week before increasing it as it will help your body to get used to it as well as you will be able to experience the change.

Gradually increase the amount until you reach the amount which gives you desired results. Through this procedure, you will be able to create your personalized dose that caters to your requirements.

Kava Kava, Kratom, and CBD oil have their effectiveness in treating anxiety and related disorders. All these three supplements are natural herbal alternatives to pharmaceutical chemical compounds that also have many side effects.

These herbal supplements for anxiety are relatively low in side effects and that too if you take them in significantly high doses.

Therefore, it is always recommendable that whichever herbal supplement you start taking for anxiety, initially take low doses and gradually increase over time until you achieve the best effective dose for treating your condition.

You can choose from any of these to treat your anxiety, stress, and depression; however, the research on Kratom is still in its early stages.

Do your thorough research before starting with any of these. Choose from these herbal supplements, which you think will suit best to your condition.