HomeNootropicsWhat Is Noopept Used For? User Reviews and Dosage

What Is Noopept Used For? User Reviews and Dosage 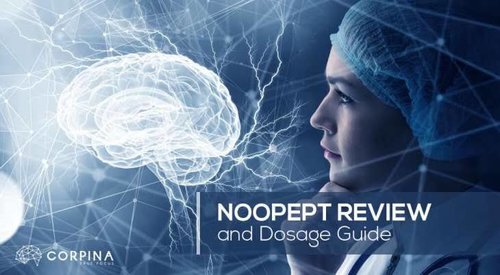 Noopept is a new class of nootropics which is famous as a smart drug.

The effects of this nootropic class are widened to enhance memory, focus, cognitive functions, and deficiencies.

Most of the times it provides assistance for cognitive conditions like dementia, Alzheimer’s and traumas.

The name Noopept may not be familiar to all. This article is an evaluation of Noopept as per mechanism of action and user reviews.

The actual chemical name of Noopept is N-phenyl acetyl-L-polyglycine ethyl ester. It has a similar structure than that of racetam class of nootropics. In other words, it is an alternative of Piracetam but synthetic by origin.

The mechanism of action of both Piracetam and Noopept is same. The only difference is that Noopept is way stronger than Piracetam.

The term which makes Noopept famous is it being a neuroprotective compound.

The scientific research supports this fact that it helps to reduce anxiety, loss of memory, instability and emotional deprivation. A long-term use promotes positivity and soundness of brain.

Noopept, as explained earlier is just a brand name. It became famous in 1960’s and 1970’s when nootropics were a new thing.

Russian pharmaceuticals are a pioneer of making noopept. It was first famous as GVS-111 in 1970’s as a brain supplement.

A Russian company Pharmastandard JSC patented it in mid-1990’s by the name of Noopept which is Ноопепт in Russian.

So now it is available without any prescription in Russia. In following years many other neighboring countries of Russia also started selling it. Only in USA FDA has still not approved it for any medical reason.

How Noopept works for you?

Noopept is very much similar to racetam, the mechanism of both is same too. Both target Acetylcholine.

There are two receptor sites to target, one is called  N-methyl-D-aspartate receptor or NDMA and second is called α-amino-3-hydroxy-5-methyl-4-isoxazolepropionic acid receptor or AMPA receptor.

Once a user ingests Noopept, the body soaks it right in gastrointestinal track. It further makes its way to the brain and starts taking action.

It increases glucose metabolism. This energy boosts the brain and helps to make it sharper. It takes only 15-20 minutes to start these effects.

Noopept has a higher bio-availability level. That’s why it provides an instant boost to the brain after taking the dose.

It further helps to increase the oxygen supply to the brain. Naturally, when there is sufficient oxygen, the nutrient availability is higher too.

The right levels of oxygen also help to repair the nerve damage and avoid it from cerebrovascular disorders like a stroke.

Together all this process makes sure that memory, focus, analytical skills, clarity, focus, and concentration are achieved.

Noopept has a higher level potential to show positive effects than the majority of other nootropics.

If we compare it to other nootropics, Noopept has least side effects than all. The benefits of using Noopept are highly diverse since it is 1000 times powerful than Piracetam. Following are some obvious benefits of Noopept.

Memory can be a big problem in-between a person and learning abilities. It is not same for all.

However, if anyone has a weaker mind, Noopept can help. Noopept appears as a permanent solution for increasing the memory.

It makes the signal transmission, neuron to neuron connection and production of acetylcholine stronger. By doing this, a highly good memory is achieved.

A boost in energy

A regular use of Noopept elevates the energy level. When there is sufficient power to carry out the functions of the brain, it allows clearer thinking. It also increases focus and helps to concentrate on an idea.

Like food for the body, Noopept is the food of the brain. It strengthens it to work more efficiently.

Not just a helper, Noopept is a neuroprotectant as well. It has high amounts of antioxidants which remove the harmful chemicals and toxins out of the body. The chances of brain cell damage are highly reduced that ensures a healthy brain.

The Human body works like a machine which has all its organs in communicative relation with each other.

For example, the brain has two hemispheres. There is a dire need of communication between both halves for the supportive, cognitive abilities.

It even helps in verbal communication of a person and adds confidence to the personality.

Reduces the risk of cognitive disorders

Dementia, Alzheimer, and many other cognitive disorders have put a large population at the target.

While the brain is the constant push for betterment, the chances of these problems are minimum. Noopept has a superior aptitude to recover, repair and reduces the risk of all brain disorders especially Alzheimer’s.

The long-term and short-term effects

The effects of Noopept are both long and short-term. It depends on why a person is using it. These effects are highly active and beneficial.

After a regular usage for a particular time, the long-term effects start to show up. These effects include good memory, quick solution finding, least risk of cognitive diseases, etc.

The unwanted effects are usually known as side effects of any drug. A mild dosage of Noopept has no negative of side effects on the user.

Even the most common side effects which may show up are headache, nausea, dizziness. These results take a few hours to go away on its own. There is no longevity and permanence of these effects.

How to use Noopept

Due to higher potency, only a small quantity of Noopept is sufficient. Taking the right dosage is highly recommended. It can be either mixed in powder form with water or sublingually taken.

Usually, nootropics used in a combining form for promoting the effects. However, in the case of Noopept, it is not encouraged.  For experienced users, choline source i.e.  Citicoline or Alpha GPC. for stacking is an idea.

The best dosage which works for every adult person is 10-20 mg for 24 hours. The pills are available in 5mg and 10mg potency. The set amount can be taken all together or split into two doses.

For the beginners, it is better to start with a small dose. It could be as little as 5 mg twice or thrice a day Later on this 5 mg dosage can be doubled.

In some case, even 10mg works like magic. The dosage of 30mg is the upper limit which no one should exceed.

The whole nootropic community is full with supplements with extraordinary promises. Some of them are old, and some are a product of latest research.

Noopept is an old yet famous nootropic which is high in demand in Russia. Initially, it was common as a medicine to reduce the chance of degenerative neurological disorders but later on became a dietary supplement.

The effects of Noopept are variable among users. The same is followed in dosage. In a Reddit thread, for some users, 20mg was sufficient whereas a few were satisfied with a higher dosage of 40mg.

It is useful in both supplement and powder form as users suggest. However, the average dosage range is between 10-30mg as per user experiences.

Another discussion on Longevity Brain Health forum, many users shared experiences for Noopept being an amazing supplement for them.

The most common effects were feeling of higher brain value, calming, enhanced focus, mental peace and ability to do any work with ease.

Many of the leading health and fitness websites endorse Noopept for being an attentive supplement. There is absolutely no negative and bad personal experience at any discussion forum online.