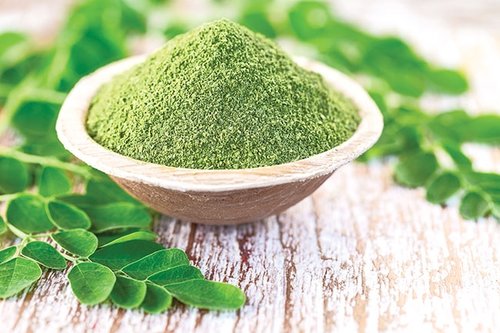 Moringa Oleifera, more commonly known as the Horseradish tree or the Ben Oil Tree has been famous for its nutritional content since Medieval times. It has now only recently made its mark in the modern health market as a herbal supplement and a superfood, capable of many deeds. It reaches up to the height of 10-12 m, has fragrant flowers and a three-sided brown capsule fruit.

Moringa originated in and is mainly cultivated in India, Pakistan, Asia Minor, Africa (Used widely in African Folk Medicine) and Arabia. It can be grown as crops, in the wild or as a solitary tree grown in home gardens.

In 2008, the National Institute of Health labeled Moringa as ‘The plant of the year’ due to its highly lauded medicinal benefits.

Research has demonstrated that every part of this tree, such as the leaves, flowers, saps, seeds, bark and roots, can be used in a way to derive maximal nutritional factors. This plant has proved to alleviate problems in third world countries due to its drought resistant properties.

Medicinal and pharmacological benefits of Moringa:

Moringa is being used to relieve different ailments and has shown promising results in the field of medicine. Its star properties include; being used as a cardiac and circulatory stimulant, having antitumor, antipyretic, anti-inflammatory, antiulcer, antispasmodic, diuretic, antihypertensive and cholesterol reducing, and fighting against different bacterium and fungi.

Literature review and numerous publications have highlighted some of the esteemed benefits of Moringa which are listed as follows:

Moringa being a rich source of the essential amino acid tryptophan and neurotransmitter serotonin has shown improved levels of the ‘feel good’ by elevating mood levels and depression.

Due to these findings, Moringa has shown promising results in alleviating anxiety and depression, even while being used in the powdered form.

A special extract of Moringa tested on mice has shown anti-amnesia effects and improved learning [5].

Moringa contains constituents comparable to anti-inflammatory compounds such as carotenoids and essential amino acids, and oxidative stress fighting elements such as beta-carotene, Vitamin C, and Quercetin, which has been seen to battle against chronic diseases.

It has seen to possess characteristics similar to Indomethacin used for chronic gout.

Moringa roots are seen to have a protective antibacterial effect. They are seen to be comparable to the antibiotic Tetracycline.

The bark also shows anti fungal effects, while the juice from the bark showed protected effects against Staphylococcus aureus and Pseudomonas aerogenous. Moringa also demonstrates the effect against Hepatitis B (HBV).

Moringa roots inhibit spasmodic action by calcium channel blockade due to which it has proved to be beneficial in treating diarrhea, gastric motility disorder, and irritable bowel syndrome. The methanol fraction of this plant has demonstrated substantial anti-ulcer and hepatoprotective effects.

The chlorogenic acid derived from Moringa has shown promising results in reducing blood sugar and allowing cells to independently take up and release sugar which ensures moringa to possess natural protection against diabetes. Experimental trials have shown reduced markers of diabetes ( IgG, IgA, and HbaA1c) in subjects who were given Moringa.

Must Read:  Does Passion Flower Get You High Like Marijuana?

Very significant anti-carcinogenic effects of Moringa have been seen in the inhibition of Epstein-Barr Virus and early antigen which has been seen to reduce cases of Burkitt’s Lymphoma.

It has also shown the capability of having protective potential against hepatic carcinogen metabolizing enzymes.

There is also evidence of protective effects against melanoma, pancreatic cancer, colon cancer and cervical cancer.

Moringa has been used as a superfood to improve levels of antioxidants, serum retinol, serum ascorbic acid, glutathione peroxidase, superoxide dismutase and selenium which in turn slows down effects of aging and senility.

It has also been used as a natural aphrodisiac since medieval times to improve sexual libido and erectile dysfunction in males and to prolong sexual activity in females.

The topical application of Moringa on the skin every morning has shown wound healing properties due to fibrinolytic and fibrinogenolytic effects.

High hydration of skin also observed due to Moringa which leads to increased smoothness and color consistency of skin and reduced appearance of wrinkles.

How to use Moringa?

Dosage: Standard dosages are set at 150-200 mg/kg oral intake. According to its set standard, doses according to the weight of a person have been set as follows:

Now even though this drug is thought to be non-toxic, that might not be the case. Supplemental dosages have been listed below and a 3-4 times increase in dosage might produce genotoxic damage and may pose to be carcinogenic.

The high dose is thought to be optimal and possesses greater potency than upper and lower doses. At higher doses, much of the anti-oxidant properties are wasted.

Its efficacy can be improved by pairing it with Oranges (Citrus Sinensis) to suppress the formation of ulcers in the chronic inflammatory disease Ulcerative Colitis.

Side effects of Moringa

Contraindications: Please consult your doctor if pregnant or breastfeeding.

Users dosing on half to 3 teaspoons of the dried powdered form of Moringa have reported a grassy, spicy/ pungent taste similar to radishes.

Users with chronic inflammatory illnesses have reported a subsequent reduction in ‘feeling inflamed and allergic.’

Healthy people with normal BMI and eating habits have said better-formed stools and digestion without any signs of urgency.

Users using Moringa as a component in detox drinks and smoothies have reported high levels of energy, better mood, and clarity of mind.

The same mental and emotional effects have also been described by patients suffering from chronic inflammatory diseases.