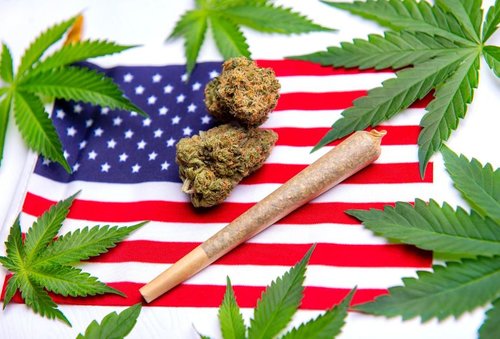 Trying to find out which are the legal cannabis states in the US? But don’t know where to start? Don’t worry; we have all the information you’ll need to find out about cannabis legality in the US!

As the topic of cannabis legality in the United States continues, so to do the amounts of states looking at legalizing marijuana, both for recreational use and medicinal use.

Knowing which states marijuana is legal, it isn’t always the easiest to pinpoint. The list is constantly changing and growing, so we have compiled the most update to the list of states where cannabis is legal!

As of the time of writing, cannabis is legal in some form in forty-six states across the US. Unfortunately, the majority of these 46 states only allow cannabis for medicinal purposes, but the list is changing every year.

Recreational use of marijuana is currently legally allowed in Washington DC, Washington State, Oregon, Nevada, Massachusetts, Maine, Colorado, California, and Alaska. Vermont is expected to legalize cannabis for recreational use later in 2018.

It’s important that you check on each state’s law and the different variances in those laws. Some states allow medicinal marijuana only to be used in oils and creams. While others allow you to smoke or vaporize marijuana.

Each state is different, and each state has different laws. Ignorance of the law is never an excuse for breaking it, and it’s important to do your homework before trying to purchase or use marijuana.

It was on January 1st that the state of California opened the world’s biggest legalized market for recreational cannabis. This market is estimated to reach almost $5 billion in revenue this year alone.

As marijuana legality continues to grow across the US, this growth rate and the profits from marijuana will continue to increase at a rapid pace.

It’s important to note that at this stage marijuana is still considered a drug at a federal level. Vermont’s legalization of marijuana will come into effect on July 1st.

Their new laws won’t allow for the legal sale of marijuana, instead limits it to possession and growing of marijuana. The governor of Vermont Phil Scott has ordered an advisory board to study the possibility of regulating and taxing legal marijuana marketplace.

This rising trend in marijuana legalization for both recreation and medicinal purposes isn’t just confined to the United States. Canada has a looming deadline for the complete legalization of marijuana for recreational use across all its provinces, with many provinces already allowing medicinal marijuana.

Federal prohibition hasn’t slowed the marijuana industry from growing at a massive pace across the United States.

More and more states are lining up to profit from the legalization of marijuana, and with the amount of money involved, no ones surprised. The biggest surprise is it’s taken this long for many state governments to start seeing the writing on the wall.

Must Read:  Is Salvia Legal In The United States?

In 2017, marijuana was responsible for making almost $9 billion in sales alone. That’s big business whichever way to try and spin it. That $9 billion was before California opened their $5 billion retail markets for cannabis.

National sales of cannabis are estimated to hit $11 billion in 2018 and almost double to $21 billion in sales in 2021. This growth in the legality of marijuana is fueling much more than sales revenue.

As the legalization of marijuana grows, so too does the science an industry supporting it. Marijuana legality is a big business, and like an avalanche, once it started, there is no stopping it as it steamrolls its way across the USA.

According to BDC Analytics, there are over 100,000 people employed in some way in the cannabis industry. 121,000 people were involved in the marijuana industry in 2017, and if marijuana continues to grow as expected, there would be 292,000 by 2021.

The taxes associated with the sale of legalized weed has been increasing in states where marijuana is legal. This increase in taxes is being moved into other areas of state growth.

What many people don’t realize is that when you legalize marijuana, you’re effectively saving money while making money. States are no longer paying to police marijuana, prosecute marijuana crimes, and jail offenders.

The growth of the legalized marijuana industry isn’t just confined to the traditional dry herb or bud market. Where consumers were once limited to whatever they’re local dealer grew or could source, now they have access to hundreds of different marijuana strains and products.

Even the way marijuana is consumed has evolved rapidly over the last decade as cannabis legality in the US has changed. You can smoke marijuana through water pipes and bongs, rolling papers, vaporizers and e-cigs, and many more.

What’s next for the legal marijuana industry in the US?

The marijuana industry, despite its growth, is still on a precarious legal footing. Attorney General Jeff Sessions shot a large amount of uncertainty into an already uncertain situation recently.

Sessions ripped up the NASCENT protections provided by the previous Obama administration on January 4th this year. He rescinded the Cole memo of 2013, which was the guidance from the then-Deputy AG James Cole to federal prosecutors suggesting a hands-off approach to the state-legal industry.

With Canada joining the legalization bandwagon later this year in July, and some of the other eastern states looking at legalization, there is no clear way to stop this train.

Legalization of cannabis across the US is moving forward, and with so much money involved in the legalized states, there’s no surprise that no one is that interested in stopping it.

What to Know About Mitragyna Hirsuta

Indonesian Kratom Ban Postponed Till 2024? What Will Happen Next?

7 Best Vitamins For Gums And Teeth

Where to Buy Cardarine Online?