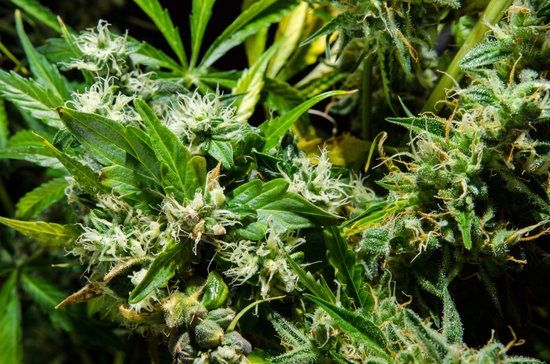 A hawk eye – That’s the only thing that you need to tell male Cannabis from female Cannabis.

The art of determining the gender of Cannabis Sativa is more a matter of timing and knowledge than anything else.

The Marijuana plant, almost quietly, transitions into its flowering stage. And before you even realize, the seedy buds will greet you with the bad news.

If you’re here in an emergency, stuck in a similar situation, here’s a quick guide for you:

The quick guide might help you rescue your young female cannabis from getting pollinated immediately. But as mentioned earlier, determining the cannabis sex, is not a piece of cake. So, it might not as well.

For that very reason, this article has been formulated to save your precious time, effort, and most importantly, investment. Continue reading to learn more about the males, females, hermies, and the whole stoned point of it!

The Cannabis plant takes around 8.5-weeks or more than 7-months to ultimately evolve from a seedling into a mature plant.

There are various stages of growth, such as germination, seedling, vegetation, and flowering. Throughout this journey, the plant’s nutrient requirement varies like that of water, sunlight, and salts.

Initially, only the germination of the seed occurs in which the tap roots sprout out of the hard and dry casing. Then, the taproot travels downwards while the stem grows upwards, and tiny green leaves appear. Now, the seed has become a seedling.

At the seedling stage, the Cannabis plant will grow more of the tiny leaves with only one ridged blade. With maturity, the plant will produce more of the ridged edges like 3,5,7, etc. It is essential to highly monitor the environment as the seedling is susceptible to diseases.

Next, the plant will enter its vegetative stage where it will only grow. For example, the root network will expand uncontrollably. Cannabis growers shift the plant into large pots and supply a lot of nutrients, especially nitrogen.

In the flowering stage, the Cannabis plant will mature with the light requirement falling to less than 12-hours. At this stage, you need to very alert as the resinous buds appear, and the different genders show their symptoms. You will have to keep your eyes and ears open.

The female plant happens to be the crowning glory of each strain of Cannabis Sativa. No matter you’re looking for buds or seeds, there might come the point where you’d like to be well-aware of the female population in your cannabis plantation.

Following are the critical parts of the plant, according to which you can identify the ladies before its too late.

The term Calyx is synonymous with sepals. It is the protective whorl of the flower, which is in bud form.

In female Cannabis plants, it is of immense importance as it is home to the reproductive organs, namely pistils and trichomes. Thus, determining the value of the plant.

Depending on the strain, the very first visible female signs that the Calyx will exhibit, are two tiny white hair.

Situated at the node and stem junction, the pair of light hair will develop anytime between four to six weeks of seed germination. With time, one can observe long hairs that may be of white, green, or purple color.

Look For The Pistil

Generally, female species of every plant comprises of a stigma, style, and ovary. Collectively they form the primary sex organ: the pistil.

For that reason, this particular part holds every cannabis grower’s attention. This long protruding beauty gets covered with orange or bronze-coloured hairs. Remember, the higher the number of hair, the better the quality of the bud.

Scientifically, known as trichomes, these glandular hair stick together due to the presence of resin. The sticky nature of these resins traps pollen grains that come from the male plants and also deters pests.

Forming the essence of the plant, they contain all the terpenes, cannabinoids, and other compounds that account for the fame pot plant.

As the plant matures, the pistillate white will turn purple or green, depending on the strain. When the plant turns 6-8 weeks old, the pistil will start turning yellow, orange, and then red.

If by chance, the plant becomes fertilized, the ovule at the end of the pistil, enlarges. The swelled structure is known as a seedpod, which may develop a striped pattern or dull grey, black, or white color.

Must Read:  Methods of Smoking Marijuana

It Will Be Shorter With More Leaves And A Fuller Body

Another easy way to identify a female cannabis plant is to examine its overall appearance. Both male and female become taller and produce new stems in their late-vegetative and initial flowering stage

However, the female ones will be shorter than the male ones and will have a higher number of fan leaves. Thus, having noticeably fuller bodies.

The top of the plant forms a dense canopy. As a result, some leaves at the bottom may fall-off, become yellow, or develop brown spots.

Note that, the female plant will still have a bushy appearance. If that’s not the case, your plant may be suffering from over-dosage of nutrients or deficiency.

The Bud Will Appear In Thick, Vertical Columns

Perhaps, by now, you’ve already identified the female Cannabis. But if you still have doubts, then these two features will undoubtedly answer all your questions.

The THC abundant flowers comprise colorful trichrome which gives it a fluffy, crystal-like appearance. Over time, they will become more extensive, with the most significant being at the top of the branches.

Eventually, the flowers will become more resinous and transform into colorful buds. The buds grow in thick, vertical columns.

If there’s still a question mark lingering around, watch this short yet comprehensive video about sexing the pot plant:

A representative of Humboldt Seed Company guides how to differentiate between a young, 4-6 old Cannabis plant. Furthermore, he explains how the same female plant can be in different stages of growth.

In comparison to the female counterpart, it is easier to determine the males in the Cannabis plant.

However, Cannabis growers must always begin identification of gender when the plant has entered its flowering stage. In this particular stage, the Cannabis plant will divert its focus from growth to sexual maturation.

Once in its flowering phase, the plant will showcase its gender-oriented organs after two months. Before that, the Cannabis plant exhibits immature organs that may confuse the identification of males and females.

Often, quick identification leads to a loss of valuable female Cannabis that produces the buds. Here are the two possible ways to determine and confirm the gender of male Cannabis.

It Is Much Taller With Lesser Leaves And Sturdier Stalk

The dissimilarity between a male and female cannabis is visible once it’s in the flowering phase of growth. The male Cannabis plant will grow taller than a female.

Also, the leaves are noticeably lesser in number in comparison to a female. If the species of both the male and female Cannabis is the same, then the leave structure will be the same.

Another factor is the stalk of the male Cannabis, which will be much sturdier and thicker than a female. It is because male Cannabis plants grow taller. Thus, they require more strength to support the entire structure.

The Pods Are Hairless And Non-Pointed

A feature used to confirm the gender of the male Cannabis plant is in between the nodes. The nodes refer to the joints in the stalk that gives rise to branches and flowers.

As mentioned in this video, the male Cannabis plant grows round, ball-like pollen sacs in the nodes. Unlike the females, the male plants have hairless and non-pointed pollen sacs.

Cannabis growers prefer to examine the gender through these ball-like structures when at least 5-6 nodes are present. It is because often, pre-mature pollen sacs resemble the female counterpart.

Thus, it is vital to identify the male plants before they start pollination and fertilize the female Cannabis plants.

The whole process may depreciate the quality of the buds produced as the female begins diverting its energy towards seed production rather than THC.

Also, the presence of Hermaphrodite, the transgender Cannabis plant, may influence the harvest production too.

As explained by the representative of the Cannabis Training University, Hermaphrodite Cannabis may indirectly pollinate the entire yield.

Hence, the Cannabis growers identify males and remove them before the whole harvest loses its quality.

On the other hand, the Cannabis breeders find it essential to recognize gender as, at times, one gender is lesser in the quantity that may affect the reproduction level.

Identifying Marijuana’s gender can be quite a daunting task. For novice Cannabis planters, slight false impressions and delays can cost a lot.

But don’t let the ambiguous anatomy of the plant, befog you. Just mark down the distinguishing features and keep an eye out!

Previous article
Kratom Vs CBD For Anxiety And Pain
Next article
What Is Noopept Used For? User Reviews and Dosage