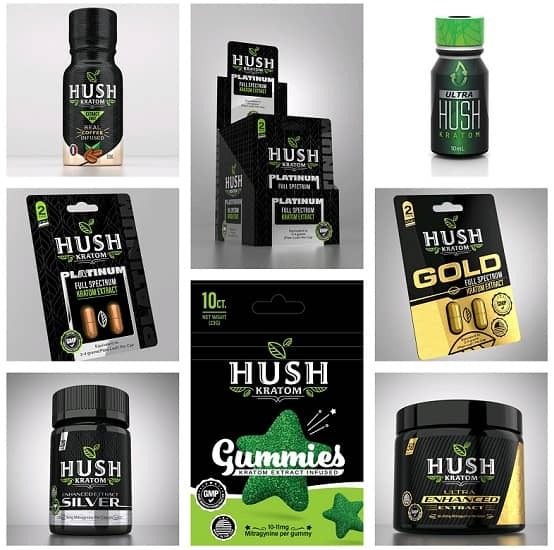 Hush Kratom is a new player in the game, but they’re already making waves in the community. In this Hush Kratom review, we’ll take an in-depth look at everything they have to offer.

As you may know, there are many different Kratom vendors out there. This can make it difficult to decide on which one to buy from. Today, we’ll be talking about Hush Kratom, a vendor that is relatively new but has many people talking about it.

From the moment you visit Hush Kratom’s website, it’s clear that this company is all about providing the highest quality, most potent Kratom products on the market. But what makes Hush Kratom so special?

For starters, Hush Kratom is a relatively new company, having only been founded in 2018. However, the team behind Hush Kratom has over 10 years of experience in the Kratom industry, so they know a thing or two about sourcing premium Kratom.

What sets Hush Kratom apart from other vendors is its commitment to selling only the purest, most unadulterated Kratom possible.

Additionally, Hush Kratom offers a wide variety of Kratom strains to choose from, so you’re sure to find one that suits your needs. However, there are a few drawbacks that might make you consider a different vendor.

Hush Kratom is a new player in the game, but should this stop you from giving them a try?

In this Hush Kratom review, we’ll take an in-depth look at everything they have to offer. We’ll also give you our honest opinion on whether or not they’re worth your time (and money).

Unfortunately, Hush Kratom is not AKA GMP qualified.

Hush Kratom does not have lab test results published on its website, which is a major drawback. We were unable to find any information about their quality control processes or whether they perform regular testing on their products. This lack of transparency is concerning and makes it difficult to trust that their products are of high quality.

As discussed above, Hush Kratom offers a comprehensive range of Kratom strains to choose from. The following are the prices of their products:

Hush Kratom is a well-known kratom brand, but their social media platforms are devoid of reviews, and their website doesn’t feature any testimonials either. You can find a few reviews on Reddit, but of course, these are not as reliable as feedback from the brand itself. Overall, Hush Kratom could improve in this area in order to show potential customers that they care about their opinion and experience with the product.

Hush Kratom’s website is designed to be simple and easy to understand. However, they could surely add a few things to make it more user-friendly. First, lab test reports should be accessible on the website. Second, testimonials from previous customers should be added to give visitors a better idea of the quality of products and services offered by Hush Kratom. Third, the website also needs an FAQ section where customers can find answers to questions like how much the shipping takes, their return policy, etc. Overall, the website is straightforward, but a few additions would make it even more user-friendly.

Hush Kratom does not have any information available on its website regarding refund/return policies for its products. This is a major drawback, as many customers would like to know if they can return or exchange products if they are not satisfied.

Similar to its return policy and testimonials, Hush Kratom does not provide any information about its shipping methods, rates, or policies on its website as well. This makes it difficult to know how long it will take for an order to arrive or if there are any restrictions on where they ship.

Has Hush Kratom Been Involved with Making False Medical Claims?

Hush Kratom has been operating in the market for hardly 4 years. They haven’t been a part of any scandals, but they have been criticized because their website lacks even the most basic details like return policy, lab test reports, testimonials, and shipping details. The lack of information has been a cause of concern for many potential customers.

Is the Brand Active on Social Media?

Hush Kratom has not been active on social media for some time now. Their last post on Instagram was 45 weeks ago, and they only have 3 posts in total. Their last post on Facebook was in February 2020. For many potential customers, this lack of activity can mean that the company is no longer in operation. On the other hand, the lack of updates might also be because they are simply not using social media to promote their business. Either way, it makes it difficult to ascertain what their current status is.

Sadly, we don’t have a lot of positive things to say about Hush Kratom.

Based on the information we could find, we would not recommend Hush Kratom. From the lack of activity on their social media accounts to the lack of information such as refund policy, shipping policy, and testimonials on their website, there are a few things that gave us a pause. They are relatively new, so that might be the reason, but for now, we would recommend looking elsewhere for your Kratom needs. We’ll keep an eye on them and update our review accordingly.

Previous article
Buzz On Bumble Bee Botanicals Reviewed
Next article
Kratom and Heart Health: What You Need to Know