HomeCannabisHow To Make A Homemade Bong?

How To Make A Homemade Bong? 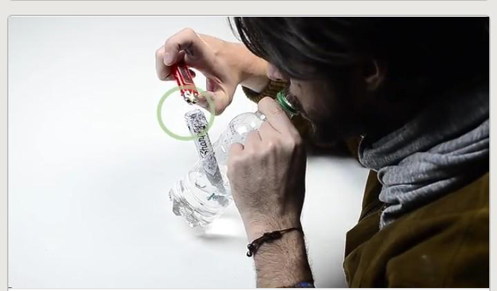 Bong are expensive. It’s not always possible for a man of meager income to set money apart to buy a glass or multi-chamber bong. These days even buying a straight bong can be an exorbitant affair. There are many kinds of bongs available in the market but if you can’t afford one, don’t worry we have a way out for you. Along with the multiple kind of bongs which are available in the market there is another type of bong which are less talked about. It is the homemade bong and it can be easily made in a home by using the simple household things like a plastic bottle, a pen pipe, aluminum foil etc.

What is a Bong?

Bong is a filtration device which is used to smoke cannabis and other substances.

Bongs enhance the quality of smoking a weed.

A joint cannot give you the high you get from a bong. When you smoke through a joint you inhale the smoke of the paper as well-but with bongs things are different.

Bongs enhance the quality of smoking by filtering the smoke through water. There are many kinds of bongs available in the market for smoking pleasures. For instance straight bongs, gravity bongs, water bongs, carburetor bongs, Percolator bongs, and many others.

Apart from the fact that you can’t afford it there are other scenarios in which you would prefer a homemade bong.

Maybe you are someone who has recently heard about the bongs and before you spend your money on them you want to try them.

Maybe you are a pro bong smoker and your glass bong just smashed into pieces, now you have some weed left but you have no bong.

In the above mentioned scenarios when you need a bong but you don’t have one you can make a bong yourself. Yes you heard it right.

You can make a bong for your cannabis yourself. Such a bong is known as homemade bong. It is very simple to make a homemade bong.

Making a bong yourself is no rocket science. It is rather easy to make it. Making a homemade bong is economical and one can save a lot of money by making a bong himself.

Smoking through a bong is healthier because the water filters the impurities present in the weed but as the THC Of marijuana is not water-soluble so you don’t lose your hit Making a bong is pretty simple and economical. You just need few household things and you are good to go.

Step by step Guide to make a simple Bong

One is always busy in Today’s era. Nowadays people don’t have time to try anything In detail, and for this reason, we can save plenty of our time by making a simple and easy to use bong.

To make a simple bong you will need.

Scissors — you will need scissors to make a hole in the bottle.

Duck tape — you will need the duck tape to make the plastic bottle airs tight.

Pen — you will need a pen to poke a hole through the bottle for the stem.

Now let’s get to the real task. Let’s make a perfect homemade bong.Foremost hold the plastic bottle in your hand and with your pen poke a hole in the bottle near its neck to make a carb.

After making a carb poke another but bigger hole in the bottle in its middle to penetrate the stem or a pen pipe into it.

When you are done making holes in the bottle get your pen pipe ready, and then slowly penetrate it into the middle hole of the bottle. This way the stem of the bong will be made

After you make the down stem of bong fold some aluminum foil and wrap it around the wide end of the pen pipe. This will be used as a bowl.

The next step is all about making your bong airtight. Make sure your bong is air tight after you complete the whole procedure of making the down stem.

You can make it airtight with a duck tape. Just wrap the duck tape around the bottle in such a way that all the holes which you have poked in the bottle are covered.

Must Read:  7 Best Cannabis Strains For Back Pain

And that was all. Yes it is. We have just made a homemade bong and a perfect one indeed.

Have a smoke through your Homemade Bong.

We have just made a beautiful homemade bong now it’s time of check if its working fine? For that.

Now pack a bowl by placing your weed in the aluminum foil.

After packing the bowl and filling the bottle with water place your finger on the carb and your mouth on the bottle.

Now light the bowl, let the bottle fill with smoke. After you see that there are enough smoke in the bottle get your finger off the carb and inhale the smoke.

If the bottle is bigger you will get an instant hit and high. See it’s that easy to make a homemade bong.

This is not it.

We can make different kinds of bongs at home if you are not simple bong lover we can make a gravity bong also known as water bong.

How to make a Gravity bong at home?

Making a bong at home is simple. There is no rocket science behind it. All it takes a little dedication and skill, and you are good to go. We have discussed in detail about the making of a simple bongs now we shall be discussing the making of a gravity bong at home.

To make a gravity at home you will need a bigger bottle because we shall cut the bottle in half.

While making gravity bong make sure that you pick a bottle which has a wide bottom because we will use the bottom of the bottle for water.

After wrapping the aluminum foil on the mouthpiece of the bottle poke little holes into the foil so smoke can spread into the bottle.

Now that the smaller part of the bottle is submerged into the larger one which is filled with water. Place some cannabis in the bowl, light them and slowly lift the part with the bowl.

While lifting the smaller part of the bottle remover the aluminum foil, and then place your mouth on the mouthpiece of the bottle and that’s it. Inhale the smoke and get the instant high.

One can always entertain the idea of smoking a weed if one has a perfect Bong. To get your desired bong you don’t always need to go online for its shopping.

Making a bong at home is much easier  and more economical. It takes a little practice and that’s it. Be dedicated to this procedure of making a homemade bong so you never have to buy it.

If you are smart you can make a variety of bongs at home. The material one needs to make a homemade bong is cheap and one can get it in the supermarket easily.

Bongs are mostly expensive because they are made from variety of materials like glass, ceramic, metal and bamboo. They come in various designs too and because of these designs they are high maintenance.

There is always a danger that a bong will smash into pieces ( especially if it’s a glass bong ) and to counter that danger it is very Important to make the bongs at home. You can make as many bongs as you want if you are creative. You can make a simple bong,

you can make a gravity bong and what not. Just be dedicated to the bong making procedure and after a while all the talent which is necessary to make a bong will come naturally to you.

Previous article
Does Passion Flower Get You High Like Marijuana?
Next article
Some Tips To Grow Kratom Plants In Your Home