HomeCBDCBD Oil for Sciatica: Benefits, How To Use and...

CBD Oil for Sciatica: Benefits, How To Use and User Reviews 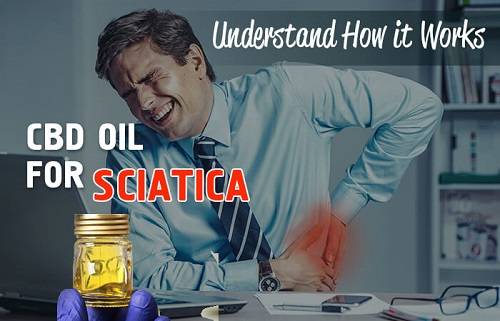 Cannabidiol, abbreviated as CBD, is among the 100 plus cannabinoids and the second major constituent of cannabis. Previously considered as a non-pharmaceutically active substance, CBD is now earning increasing popularity across the globe.

Its non-psychoactive and analgesic properties have made it a suitable remedy for people who are looking for relief from a wide range of medical conditions including Sciatica, without having to experience any feeling of high or euphoria.

Sciatica (pronounced as sigh-at-eh-Kah) is not a medical condition in itself. It’s the consequence of another underlying problem, which develops over a period of time and is most commonly diagnosed in people around the ages 40-50.

The disease occurs when the sciatic nerve, which is the largest nerve in the body, is irritated or compressed at or near its point of origin. This nerve runs from the lower back, through the buttock, and down the back of each leg, branching out further into the thigh, calf, foot, and toes.

The condition is usually caused by abnormal intervertebral disc pinching the nerve, but can also result from tumors, inflammation, infection, injury or irritation from adjacent muscle/bone. Symptoms of Sciatica include;

How does CBD help in treating Sciatica? Is it Beneficial?

Recent estimations have suggested that about 40% of U.S. adults at some point or another experience sciatic nerve pain. Sciatica treatment, therefore, has become a top priority for researches, who have come up with various solutions that involve a lot of techniques, ranging from prescribed medications to surgical procedures for people who suffer from severe Sciatica.

Mild symptoms of Sciatica, are, however, usually treated with bed rest, pain relievers, muscle relaxants, anti-inflammatories, and antidepressants. Because these medicines sometimes may not work, or may even pose health risks in the long run, many people have been looking for their natural alternatives.

This is when CBD comes into the scene. The cannabinoid with its wide range of medicinal and therapeutic properties has been found as an extraordinarily beneficial remedy for sciatic nerve pain. It helps relieve the symptoms of Sciatica by acting as an;

The pain-relieving property of CBD, is perhaps, considered the most significant in treating sciatica pain. The substance acts as a strong analgesic by preventing the body from breaking down the compound anandamide, which is related to pain regulation. Higher concentrations of anandamide in the body results in reduced pain perception.

This property of CBD has enabled patients to carry out heavy duties normally and effectively, without having to worry about sudden shooting pains, which would otherwise make it impossible to lead a peaceful life.

In an article published by Independent, 55 years old woman, Brenda Davidson, from Kirkwall, Orkney, stated that her 13 years of suffering from sciatica were cut short by the use of CBD oil. The woman, who was a cafeteria assistant, expressed that the intense pain regularly reduced her to tears, and left her unable to carry out everyday tasks. She commented that CBD gained her attention because it was non-psychoactive, and therefore, legal, and also because it was recommended to her by her hairdresser. She was very satisfied with the product and claimed that it worked instantly, leaving her virtually pain-free.

Many Sciatica patients are often prescribed with anti-depressants and anti-anxiety drugs. CBD acts as a natural substitute for these drugs by helping reduce stress levels and deliver sedating, calming and relaxing effects. It also increases motivation levels and makes a person feel generally happy and satisfied.

Problems with Sciatica often arise due to wrong postures or long-time muscle strain. CBD helps in relaxing the muscles that are strained or tensed around the compressed nerve. This helps reduce the excruciating pain is caused by the constantly pinched nerves.

CBD behaves as a CB2 receptor inverse agonist which accounts for its well-documented anti-inflammatory properties. There is evidence that CB2 inverse agonism can inhibit immune cell migration and reduce clinical signs of inflammation.

CBD oil is, therefore, widely used by people who have a history of underlying inflammatory problems that have resulted in them suffering from sciatica.

While CBD oil can be taken in many different ways, for Sciatica it is usually taken under the tongue. In order to take CBD oil, the user has first to hold it under the tongue so that it could be absorbed in the mouth prior to swallowing.

This step is important because if the CBD is swallowed instantly, the product will enter the digestive system, and will take time to be broken down due to which it will show delayed effects.

It is also important to take a very calculated amount of the product, as too high a dose may cause unnecessary inconveniences. Users suggested that 5-10 drops of 200mg CBD oil on a daily basis was ideal for treating sciatica.

User Opinions Regarding The Use of CBD Oil for Sciatica

When Sciatica patients who were using CBD oil for Sciatica or other pain relief, were asked about their experiences on drug forums such as Reddit, they commented that the product had not entirely fixed the problem, but had helped considerably in lessening the severity of the symptoms.

One user commented “It definitely helped me. I started with 250mg full spectrum 2x-3x a day but have recently switched to a 500 mg isolate tincture 2x a day that has made my pain pretty much disappear. It has also been incredible in helping inflammation and anxiety”.

Another user stated, “I’ve been taking CBD oil/edibles for the past couple of days, and they’ve really helped with my pain.” Some users also suggested the use of topical CBD oils for pain management, but the idea was considered unconvincing as the oils weren’t very penetrating and therefore not that useful.

While expressing his views, a user commented “The topical oil will not work. I have sciatica occasionally, and topicals have never done a thing for it. Sciatica is a pinched nerve, and ointments won’t touch that.”

Users also believed that compared to CBD isolate, Full spectrum CBD oil worked better in treating Sciatica. They commented that the broad range of Cannabinoids found in Full spectrum CBD oil gave the best results because they worked synergistically, amplifying each other’s benefits in what is called the Entourage effect.

Conclusion on CBD Oil for Sciatica

It’s important to take into consideration that not all CBD oils are created alike, and while one CBD oil might work for one person, it may not work for another. This is because every individual has distinct characteristics such as weight, genetics, tolerance and body functioning.

When using CBD oil for Sciatica, it is likely that results might not be immediate and may take a while before it starts to relieve the symptoms of sciatica. It is, therefore, recommended that you should experiment with different products, doses or even a medical professional before calling it quits.

Previous article
CBD Oil For Chronic Spinal Stenosis Pain? How To Use?
Next article
How To Pass Marijuana Drug Test In 24 Hours?