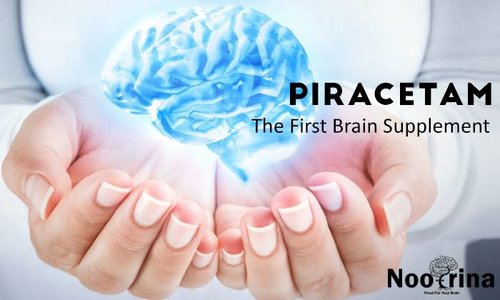 Cognitive decline is not only common in old age it may occur while you are young adults. You may notice issues like the decline in cognition, memory, concentration, thought process and reasoning but you do not need to worry about these problems as nootropics help you enhance the cognitive functions which include memory.

Piracetam is the oldest, safest and most studied drug which belongs to the nootropics family. It is a first tried drug of the nootropic family. Piracetam is derived from GABA, and it was termed as a nootropic due to its cognitive functions. It is an active drug and acts as a neuroprotective and cholinergic agent.

Piracetam affects the Acetylcholine and Glutamate receptors which improve the synaptic plasticity causing the brain to generate and maintain the new neural connections.

It is an inexpensive supplement that is readily available on the market. It is recommended dosage be around 1.5-5 grams.

Start with a dosage of 1500 mg daily. Use it for a few weeks without stacking it with other compounds and check its effects on your body. The technique allows you to assess the side effects and comparisons between each stack.

It reverses the signs of neural damage and enhances the fluidity of the cellular membrane.

The supplement is safe and has been studied for long periods. It has some side effects, and the most common one is a headache. If this supplement is taken regularly, it may increase the demand for essential neurotransmitter i.e. Acetylcholine. However, you can solve this issue with Piracetam by stacking it with Choline.

Many individuals are interested to know which supplement is best to stack with Piracetam. The dosage range of Piracetam is around 9.6-20 grams.

So what is nootropic stack?

It is a combination of around two or more two supplements that provide beneficial effects on your learning, memory, focus, and motivation. You can increase the cognition effects by stacking the supplements together and producing the synergistic effects.

You can boost your brain’s abilities by the supplementation technique.

There are two available options for nootropic stacks either you can use Preformulated stacks or prepare custom stacks.

We will explain the synergizing combos and popular potentiators and why and how are they effective.

Choline is a significant nutrient that acts as a precursor for acetylcholine. Many people lack this nutrient so you can consume it in natural foods i.e. brain foods example fish and eggs.

You should either try the attacking dosage or use the two supplements gradually without jumping to a higher dose. You can also start with Piracetam alone and if you feel headaches then add Choline in it.

At the beginner level, Piracetam is the best choice to stack with different compounds. The primary type of Racetam is Piracetam which you can easily stack with Choline especially Citrate and Choline Bitartrate. These choline forms satisfy the individual’s nutritional requirements.

Lecithin or Choline Bitartrate should be used in a 1:1 ratio to start as a beginner. However, be careful while using soy-based lecithin as it has adverse effects on individuals who have a sensitivity to it.

Choline Supplement For Stacking With Piracetam

Choline deficiency is common in individuals, so it is a better idea to stack your Racetams with Choline supplements. The two high-quality, accessible precursors include Citicoline and Alpha GPC. You need to choose the best option according to your personal preferences, taste, and needs.

Choline is a significant nutrient which forms the fatty tissue of brain mainly Phosphatidylserine and Phosphatidylcholine i.e. PS and PC. Acetic acid and Choline combine to form Acetylcholine which is an important neurotransmitter that helps in memory and learning.

Citicoline, on the other hand, is dopamine precursor which increases the levels of energy, motivation, and mood while GPC results from Lecithin that helps to increase the endurance and strength along with cognition.

Alpha GPC has 40% of Choline in weight. The high quality of Choline sources should be used as recommended dosage i.e. around 100-600 mg for Alpha GPC and 250-300 mg for Citicoline.

The dosages according to timing are as follows:

When you use Piracetam, it results in increased demand for acetylcholine and its precursor i.e. Choline, so it is better to stack it with Choline.

The following are the benefits of starting Piracetam and Choline stack:

Piracetam is the best neuroprotective agent that helps to improve cognitive abilities and prevents brain injury. However, Oxiracetam and Aniracetam are considered analogs of Piracetam, but each of them has different flavors.

Piracetam increases memory formation, recall, and consolidation while Aniracetam improves concentration and memory and acts as an anxiolytic agent. Aniracetam is required at a low dose and produces more potent effects when compared to Piracetam.

Must Read:  Which Nootropic Is Best For Concentration And Focus?

Oxiracetam is an energizing and motivating supplement while Aniracetam is more social and has anxiolytic properties. Aniracetam has similar effects as Piracetam. However, it acts faster which increases the effectiveness and benefits of your nootropics.

These advantages include the enhancement of energy and focus levels. Oxiracetam enhances the power of cognitive processing. The stack of Piracetam with Oxiracetam provides cognitive benefits along with mood improvement.

Racetams take around 4-6 weeks to provide you with maximum benefits then cycle it on and off so that your body does not become tolerant to it. You can also add Choline to these stacks.

The recommended ratio of Aniracetam to Piracetam is 1:4. Following are the dosages according to timings:

The side effects include anxiety, insomnia, and headaches.

It is a mild combo that can make the Piracetam stack more efficient. Caffeine is primarily found in coffee while L-Theanine is a type of amino acid that is found in green tea. It is a highly praised stack among the nootropic users.

The caffeine and the l-Theanine combo are neither unsafe nor expensive. It is an impressive stack which is technically found in the Asia health and medicine staple i.e. Camellia Sinensis (Chinese green tea).

Green tea comprises of antioxidant, stimulant caffeine and focusing compound along with an amino acid which acts as a sedative with a punch of concentration. The best ratio for the Caffeine to Theanine is 1:2. The combination of these supplements boosts your mental energy.

The recommended dosage is around 100mg for Caffeine and 200mg for L-Theanine.

It is an impressive stack which includes Huperzine-A derived from Huperzia plant. It potentiates the effects of Piracetam. Piracetam increases the Acetylcholine while Huperzine-A prevents the breakdown of Acetylcholine.

The potent drug Pramiracetam is also stacked with Piracetam. Pramiracetam should be consumed with food as it is fat-soluble.

The addition of Pramiracetam improves the effects provided by Piracetam. Some individuals report that the use of these stacks helps in the improvement of motivation, cognitive enhancement, and drive.

Stack Piracetam with Caffeine, Vinpocetine, and Choline. The combination of these supplements especially Vinpocetine provides substantial benefits and increases circulation to the brain and boosts the clarity. Caffeine results in improvement of energy levels while Choline benefits in neuroplasticity.

The Legal Aspect Of Piracetam You Want To Know

FDA does not approve that Piracetam can be used for treating the medical conditions. It is because of the lack of testing and studies.

Some doctors regularly utilize piracetam for personal and medical treatment purposes. It is consumed and possessed legally in many countries such as the USA, Asia, Canada and other nations in Europe.

Are Nootropics Working On Your Body And Safe For You?

Nootropics may sometimes not work well for you due to several factors such as the effects of drugs or hormonal imbalance under stress situations. Nootropics take around 2-3 weeks to produce their results. You can also increase the dose if you cannot detect the effects of nootropics but don’t confuse them with stimulants.

Consult your doctor before you start taking nootropics, but nootropics and Racetams are safe if taken in recommended doses. Drug interactions and side effects of these drugs are minimal, so they do not tend to be addictive.

Nootropics have long term effects on neuroprotective function. Use the nootropics in a safe range as mega doses may result in headaches, irritability, mild depression, brain fog along with anorectic side effects. You can reduce these effects by the addition of Choline to these stacks.

Every individual has different brain chemistry. It varies from person to person. You can change your stack if it does not work for your body. You may need to change your supplement, dosage levels or the frequency of doses per day.

However, keep in mind that once you make a single change then maintain it for at least 3-4 weeks.

There are multiple options at beginner’s level to make a few changes, this includes:

Choline Piracetam stack is the best to improve your cognitive functions, improves memory and blood flow to the brain. You can either use Alpha GPC or CDP Choline.

However, always remember that all these supplements take a few weeks to enhance the active levels of neurotransmitters within your body. Once they improve the effects, you will notice an improvement in cognitive functions.

The key to the best stack is to perform your research and identify the best supplements for your body. Design your stack according to your goals and try different combinations with Piracetam.

Previous article
Noopept and Phenylpiracetam Stack: Does This Combination Really Works For Your Memory?
Next article
Etizolam For Anxiety and Depression